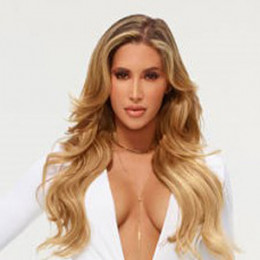 Claudia Sampedro is a model who has made her appearance in the various magazine cover. She garnered the fame after appearing in E! TV series WAGS Miami. She is the current girlfriend of American football defensive end for the Carolina Panthers of NFL Julius Peppers.

Claudia Sampedro was born on 27 October 1989, in Havana, Cuba. She grew up in Miami, Florida with her family. She moved to Miami at the age of 6. She majored in cosmetology after completing her high school education.

Sampedro began her career at the age of 16. She worked for modeling agent and scout John Casablancas at that time. She then worked for the plastic surgeon for some time. In 2011, she joined the Nutri Sups Company as a sponsored glamour model. Furthermore, she has made her appearance in magazines such as Face 2 Face Magazine, and Mixed Magazine.

Sampedro gained a critical acclamation after appearing in E!’s reality show WAGS Miami. Not only the name and fame she also garnered million fan followings on her social media site. Her Instagram follower is more than 1 million.

As a model, Claudia earns a decent amount from her career. Her current estimated net worth is $1 million. She charges 30-40 thousand per photo shoot. She also made a lot of endorsement and sponsorships.

Sampedro, 27, is not married yet. She is in a romantic relationship with NFL pro athlete Julius Peppers. The duo started dating since 2011. They are also proud parents of three children.

The couple welcomed their first child Elijah Peppers in 2015. His girlfriend has two children from her previous relationship.

Keana Skye is a daughter of Claudia Sampedro from her previous relationship. She was born in 2009.

Amare is the son of Claudia Sampedro and her boyfriend, Julius Peppers. He was born on September 21, 2015.

Elijah Peppers is the son of Julius Peppers from his past relationship.