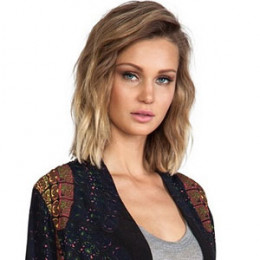 Cleo Cole Elliott is the only daughter of Sam Elliott and Katherine Ross. She started her career as a model and eventually switched to the music industry. Currently resides in Los Angeles, California, Elliot is quite ambitious and hardworking. She is possibly single at the moment.

The only child of Sam Elliott and Katherine Ross, Cleo Cole Elliott was born on September 17, 1984. She is American and belongs to White ethnic group. Her birth sign is Virgo.

Both her parents are well-known celebrities in Hollywood. Her father, Sam Ross is an actor, producer and writer and her mother, Katherine Ross is also an actress.

Cleo Cole Elliott with her father and mother.
Source: TipHero

Growing up, Elliott learned to play guitar and flute in her school days. Her interest in Italian Opera grew leading her to study the style under Charity Chapman. In 1995 and 1996, she won the 2nd place in the California State Art Award.

She is a graduate of Joanne Barron/ D.W. Brown Acting Studio.

With the interest in music, Cleo Cole Elliott pursued a career in the music industry. She is also a trained classical singer.

As of now, she is known as a musician. But before that, she started off as a model landing a gig on the Live hair styling show, Sexy Hair.

Cleo Cole Elliott's net worth is $1.5 million, but the official figure is not public yet. She accumulated most of her earnings from her music and model career.

Her Instagram post suggests that she is living a lavish lifestyle. She posts many pictures traveling to amazing places. Her father Sam Elliot is estimated to have a net worth of $10 million and $16 million according to Celebrity Net Worth and The Richest. While her mother Katherine Ross has a net worth of $5 million.

Cleo Cole Elliott is possibly in a relationship with Randy Christopher. She was linked with him after she posted a picture on October 6, 2017, on Instagram with a caption lunch date.

Her mother Katherine claimed that Cleo used to abuse her emotionally and verbally as a kid. As she grew older her violent behavior increased, on March 2, 2011, she even threatened to kill her mother and kicked the cupboard door, later followed her around the house.

When Ross tried to call the police but Elliott cut the phone line and stabbed her six times on her right arm.

On March 8, 2011, Ross filed for a protective order and until the court hearing on March 30 Elliott was not allowed 100 yards of Ross and if she had to come to the family's Pacific Coast Highway home, police needed to be present.

Elliott love animal has many dogs and cats as pets. As for her social media handles, she has around 2k followers on Facebook and 5.6k on Instagram as of January 2019. She stands a tall height of 5'8" feet.

Here is a video of Cleo Cole Elliott with her mother Katharine Ross.