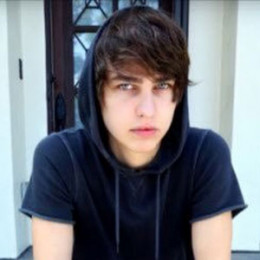 Colby Brock is one of the famous American social media personality who came to limelight after he uploaded Vine videos as one-half of the video content creating duo Sam and Colby along with his close friend and Vine Star, Sam Golbach. Also, he has a huge fan following on Instagram and Twitter.

Colby Brock was born on 2nd January 1997 in the Stanley, Kansas, United States. He met Sam Golbach in high school, and they both had a crush on same Drummer girl.

He started his career as a social media personality along with his friend, Sam as one-half of the duo Sam and Colby.

They began posting amazing videos of their unusual activities on a Vine page. They have reflected the positive aspects of a life dedicated to the teenagers from the video.

He and Sam reached their first 10,000 followers in January 2014 and first 100,000 followers two months later in April. The same year, he got an opportunity to collaborate with Jack Dytrych on a video named Inappropriate Songs While on Hold.

Their video titled 'Following Fat People' on Vine has more than 15 million views, published on 4th August 2014. The video also created controversy and was asked to take down the videos as well. When the app closed down, they had 1.6 million followers on Vine.

Moreover, Colby has collaborated with YouTube and vlogger called Big Nik. He also has work experience with advertisers such as Dixie Cups and Pop-Tarts.

Colby is just too young and has lots of time to be in a love relationship. Currently, he is single and working hard to appear in the TV industry.

Once he along with his close friend, Sam had a crush on the same girl during their high school. They even planned to make the girl their girlfriend and made dating schedule. Later, both of them ended up being great friends.

Colby has not only gained popularity in a short period but also has earned a good sum of money. Looking at the views on their videos on YouTube, he probably draws a good amount of income from it. He maybe has a net worth not less than six figure.