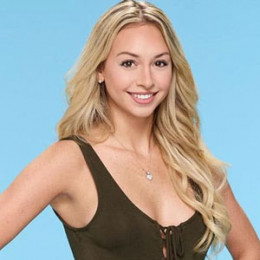 Corinne Olympios is a popular model, actress, and a reality star. She rose to fame after her participation in "Bachelor in Paradise" and the 21st season of "The Bachelor ". She has dabbled in modeling and has appeared in music videos for Pitbull, Akon, and DJ Khaled. Olympios often came into the limelight because of her relationships and controversies with co-contestant. As of 2018, she is in a romantic relationship with Jon Yunger.

Corinne Olympios was born on November 11, 1992, in the United States. Her zodiac sign is Scorpio which defines her personality as strong-willed, passionate, intelligent, jealous, possessive and secretive. Olympios has a younger sister named Taylor Olympios. She graduated from Florida International University.

Corinne Olympios runs her family online multi-million business before came into limelight. She started her modeling career soon after her schooling. She appeared in the music videos of popular stars like Akon, Two Chainz, DJ Khaled.

Olympios involved in the Nike campaign as well. But she rose to fame after participating in the Bachelor in Paradise in 2014. She was highly criticized for sexual misconduct with her co-contestant, DeMario Jackson which affects her image in public but after an internal investigation, it was determined that there was no misconduct and filming which was resumed shortly after.

Corinne Olympios has an estimated net worth of $250 thousand. She earned between $80k-$100k from her appearances in the reality TV shows. She runs an online clothing store, Riot Society where the clothes are found between the price of $19-$39.

This. Guy. My goodness Im the luckiest girl in the universe.

Previously, she dated realtor Michael Fogel in December 2017 but they broke up soon after. She has a brief relationship with her Bachelor in Paradise co-star,  DeMario Jackson, and Nick Viall.

Below we present the video of Corinne Olympios,