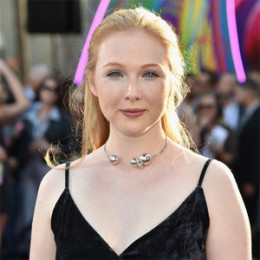 American actress, Molly Quinn is well-known for her role as Alexis Castle in American crime-comedy-drama television series, Castle. She is also recognized for voicing Bloom in television series, Winx Club. Quinn was awarded Best Newcomer, Short Film Award at the Monaco International Film Festival 2009 for he role in The Sacrifice. She also voiced in 2013 animated direct to video superhero film, Superman: Unbound, and has appeared in music videos as well.

Molly Quinn was born Molly Caitlyn Quinn on October 8, 1993, in Texarkana, Texas to Tom Quinn and Dianne Quinn. She is American and belongs to White-American ethnicity.

Quinn appeared in her community’s performance of the two-act ballet ‘The Nutcracker’ at the age of six.

She auditioned at the Young Actors Studio while she was in sixth grade performing for the program’s director, Linda Seto and representatives from Osbrink Talent Agency. After six months of acting training, she was signed by Osbrink agency and Management 360.

Molly Quinn made her film debut with 2007 American comedy film, ‘Walk Hard: The Dewey Cox Story’ as a teen with pinups, along with Jenna Fischer, Angela Correa, Margo Martindale and others.

In 2009, Quinn was cast in comedy-drama film, 'My One and Only.' The same year, she worked in two movies, 'Disney's A Christmas Carol,' and 'The Sacrifice.'

Between 2009 and 2016, she featured in American crime-comedy-drama television series, 'Castle' as the lead character, Alexis Castle. In the series, she worked with Nathan Fillion, Stana Katic, and Jon Huertas among others.

In 2011, Molly Quinn voiced Princess Bloom in English-overdub of animated television series, ‘Winx Club’ and appeared on the show till 2014.

In 2012, Quinn appeared in two movies, 'The First Time,' and 'Winx Club: The Secret of the Lost Kingdom.' A year later, she starred in 'Winx Club 3D: Magical Adventure', 'Hansel & Gretel Get Baked,' 'Superman: Unbound,' and 'We're the Millers.'

She worked in various movies between 2014 and 2017, including, 'The Shift,' 'Welcome to Happiness,' 'Last Rampage,' 'Thrilling Adventure Hour', and 'Release the Panic' among others.

Quinn’s upcoming movie, 'Newly Single' released in Tallinn Black Nights Film Festival on November 27, 2017, and it is set to release on August 1, 2018, in the USA.

Molly Quinn is dating television producer, Elan Gale, her boyfriend since 2015. Gale is known for his American dating and relationship reality television series, The Bachelor. He has also produced Bachelor Pad, The Bachelorette, Bachelor in Paradise and High School Reunion.

Once, Quinn was rumored to be dating her co-actor, Chris Tavarez. As per sources, they met on the sets of Avalon High and started dating after that. However, there has not been any evidence to prove their alleged affair.

Molly Quinn had once told that she wanted to play a negative character, not a bad guy but a dark and mysterious character. She is a dog lover and has two pet dogs, a Toy Poodle and a Chihuahua.

Molly Quinn is American actress and generates her income through acting. Therefore, she might have a good net worth. As per sources, her net worth is $1 million.

As per the sources, Nathan Fillion, one of the lead characters of Castle earns $100k per episode. She also is the lead in the series may not make as much as him but surely a five-digit figure.