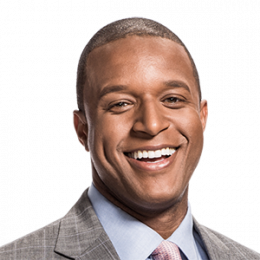 An American journalist and news anchor, working for NBC News as well as MSNBC anchor and NBC News correspondent , Craig Melvin is a son of Lawrence Melvin and Betty Melvin. Craig began his career from WIS as an anchor and reporter. He has won Emmy Award in a category of Best Anchor. Craig was a member of Kappa Sigma fraternity. He is an anchor of MSNBC Live as well as he is a co-anchor of Today Saturday edition.

Craig Melvin is married to ESPN sports anchor as well as  a former reporter of WRC-TV sports reporter  Lindsay Czarniak. The couple married on 15th October 2011. Craig and Lindsay have a son named Delano Melvin, he was born in 2014.

The couple has one son named Delano Melvin he was born in 2014.