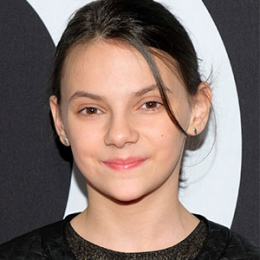 Famously known for her character Laura in the 2017 blockbuster Logan, Dafne Keen is recognized for her acting skills and hard work in Hollywood. The British-Spanish actress is also popular as the daughter of well-known British actor Will Keen. She won MTV Movie & TV Awards in 2017 and Empire Awards in 2018.

Personal Life of Dafne Keen; Know about her Family

Dafne Keen is possibly single as of now. She is quite ambitious and focused on her career as she shares no time for a relationship. Moreover, she is currently engaged in her up-coming project "The Home Of".

Dafne Keen, the 15-year-old actress is quite close to her His Dark Materials co-star Amir Wilson. They met on the set of HDM in 2019 while auditioning for her role. In the series, Dafne portrays the character of Lyra Belacqua while her alleged boyfriend Wilson played Will Parry.

On top of that, Keen celebrated Kit Connor aka Pantalaimon's 13th birthday on December 19, 2019. She is quite close to her male co-stars often spends time with them.

Famous British-Spanish actress Dafne Keen during one of her photoshoots.

Keen was born in the family of renowned actors as her both parents are well-known faces in the film industry. There is no wonder that she is a great actress as it was in her gene.

The British-Spanish actress is quite active in social sites and loves to share pictures regarding her personal life and work as well. Furthermore, she loves to share her time with animals whenever it is possible.

What is the Net Worth of Dafne Keen? Know About her Earnings and Professional Career

Dafne Keen holds an estimated net worth of $400,000, from her flourishing acting career. She is just one film old but already garnered massive popularity among her fans and media. As a result, she gets several offers from many popular brands and banners.

Had a great time at #starsoftomorrow on Thursday. Thanks @screendaily

The actress made her acting debut in 2014 while working alongside her father Will Ken in the TV series The Refugees. She portrayed the role of Ana "Ani" Cruz Oliver for 7 episodes in that series. Besides, she is currently working in the British fantasy adventure series named His Dark Materials with the role of Lyra Belacqua.

Keen also tried her luck in the film industry by working in the 2017 blockbuster movie Logan. She acted as Laura Kinney in the movie alongside the famous Hollywood celebrities like Hugh Jackman, Patrick Stewart, Stephen Merchant, Boyd Holbrook, and many more. Further, the film collected a total of $619 million in the box office worldwide against the budget of $97-$127 million.

Here take a look at the interview of Dafne Keen at the Empire Awards of 2018!