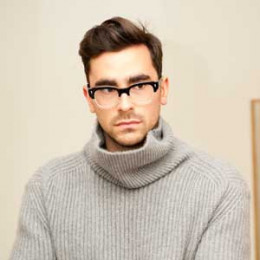 Canadian actor, Daniel Levy is also the famous writer, host, producer and a great personality too. He has not opened up his personal life with the media. Levy is popularly known as the host of MTV Canada. The gifted man sets an example for all the people. Daniel has a unique style, and a dressing way so is praised by the fashion industry.

Daniel Levy is currently single and there are no records of relationships and dating of Daniel. But there was a rumor of him to be married to an American model and actress, Rachel Specter. But the story is false as Daniel is gay.

He was called 'a member of the queer community' during an interview with Flare in 2015. Previously, he avoided talking about his sexuality publicly. It was during an interview in 2017 he confirmed that he is gay and has been out since he was 19 years of age.

"My family was completely open and accepting. I’ve been gay since I was 19 and it’s never been a secret."

There were many who supported Levy while Doyle's criticism faced protests by some Twitter users.

Daniel has no such posts on Instagram about his love life and marriage. He has kept a very low profile about is affairs. However, Levy looks like he is possibly single.

How Much Is Daniel Levy's Net worth?

The famous TV personality, Daniel has an estimated net worth of $3 million. He is earning much from the TV shows, series and movies as well. He has a high profile life. Levy wears expensive and unique dresses and has set a unique style in the industry.

Daniel's career started in the early 20s. He began as a co-host in  MTV Canada's flagship show MTV Live. Later on, he worked as co-producer, co-writer and co-host too in shows like The Hills: The After the Show and The City: Live After Show.

He also worked in other various MTV shows like Daniel Levy's Holi-Do's & Don'ts for MTV, the X-factor pre-show, MTV Movie Awards Red Carpet and national coverage of the Vancouver Olympic Games for CTV as co-host, co-writer and co-producer too. Levy also appeared as a guest in Canada's Next Top Model in 2008. 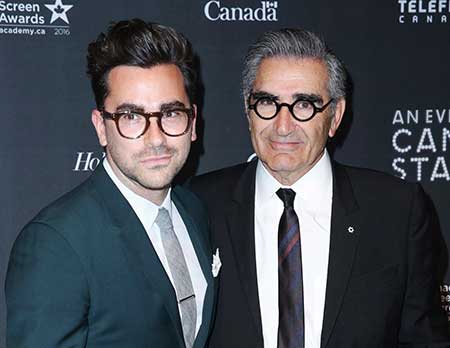 Daniel Levy with her father Eugene Levy arriving at the 3rd Annual "An Evening With Canada's Stars."
Source: 680 News

Besides being a TV personality only, he also worked as an actor. Degrassi: The Next Generation is his debuted movie opposite Tina Fey. In 2013, he formed a production house named, Not A Real Company Production and produced a comedy series for CBC. Daniel worked with many celebrities like- Annie Murphy, Chris Elliott, and Catherine O'Hara.

"I think in certain parts of America, David’s sexual ambiguity was a big question mark. (But) it was issues like that that I find quite exciting."

At present, he is working as a host of 'The Great Canadian Baking Show' with Julia Chan. The show premiered on 1st November 2017  on CBC.

Daniel was born on 9th August 1983 in Toronto, Ontario with the birth name, Daniel Joseph Levy. He was born to mother, Deborah Divine, and father, Eugene Levy, Canadian actor. Levy grew up with his sister, Sarah Levy (Canadian actress). He completed his education from York University, Toronto.