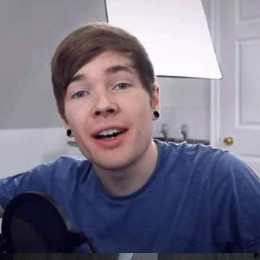 Daniel Middleton is a YouTube star, popularly known by his online name DanTDM. He is widely popular for posting daily mod reviews and Let's Plays the popular and most played game Minecraft. His first video was created and uploaded in July of 2012. He has more than millions of subscribers and is known as the most subscribed YouTuber. He also is a winner of Nickelodeon Kid's Choice Award.

Middleton was born on November 8, 1991, in Aldershot, England. He is English and belongs to Caucasian ethnic background. He has a younger sibling. His parents divorced when he was a child.

Middleton attended the University of Northampton. He started a YouTube channel dedicated to Pokémon in 2010, while at the university. He called himself PokemanDanLv45 in the videos.

Middleton started his career in 2012. He created a gaming channel titled The Diamond Minecart that year. He changed his YouTube channel name to TheDiamondMinecart // DanTDM and change the name again to Dan TDM on December 12, 2016.

Middleton has been a regular guest at the Insomnia Gaming festivals and was also featured on CBBC’s Technobabble twice. He commented on several on the show.

Middleton released a graphic novel, Trayaurus and the Enchanted Crystal on October 6, 2016. The graphic novel features characters from his YouTube shows that include DanTDM and his dog Grim, the scientist Dr. Trayaurus, evil lab boss Denton and sidekick Fin.

Middleton also featured as a guest at the Cheltenham Literature Festival and went on a book tour including parts of the UK and a visit to New York City.

In 2017, Middleton went on a tour to the United States to 21 venues. The same year, he went on another tour to Australia.

Middleton has an estimated net worth of about $30 million as of January 2019.

As of January 2019, he has 20.9 million subscribers on his YouTube channel DanTDM.

Talking about his personal life, he is a married man. He married his longtime girlfriend, Jemma Middleton on March 17, 2013.

Middleton currently lives with his wife in Wellingborough, Northamptonshire, England. They both are You Tubers who usually post videos on their personal YouTube channel.

Middleton does not have any children yet. There is no record of his past relationships. He often posts his picture along with his wife on Twitter and Instagram. His wife also enjoys Minecraft and spent a lot of time gaming together.

Here, the lovely couple celebrated New Year 2019 along with their lovely pugs and shared their happiness via an Instagram post.

HAPPY NEW YEAR! Thank you for an incredible year everyone, here’s to the next one

Though the two don't have children of their own, they consider their pets as their own kids.

Here's a YouTube video where he talked about his marriage. He stated that he has been married to his wife for five years and they are together for more than nine years.

She was a YouTuber who is commonly known as Jemplaysmc. After her marriage she has not posted videos on YouTube.