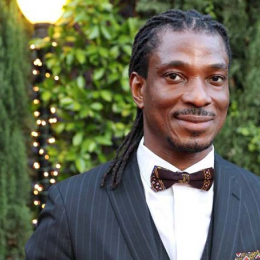 David Adefeso lies upon one of those American celebrities who caught the limelight after dating well-established Hollywood singers. The 42-year-old Financial Consultant is popular for dating the American singer and songwriter Tamar Braxton.

Personal Life Of David Adefeso; Is He Dating Someone?

David Adefeso is currently dating the famous American singer and songwriter Tamar Braxton. The duo first met at the birthday party of their mutual friend and since then they were rumored for dating. Moreover, their dating rumor was confirmed when Tamar admitted dating David on The Wendy Williams show in September of 2018.

The couple is now together for more than ten months and is often spotted together at public events. The duo made their debut together in the red carpet at the premiere party of BFV Season 6.

David is out of any rumors and controversies regarding his personal life and professional life. He is a private person and does not share much about his personal life in front of social media. Additionally, he used to avoid media attention but after his relationship with his girlfriend, Adefeso is often spotted on camera.

What is the Net Worth of David Adefeso

Adefeso started his career by working as an accountant in Los Angeles, California. But later in 2002, he collaborated with the company The Pacific Group which is based in Los Angeles and Fort Worth, Texas. Since then, he is working in the company as its CEO and financial consultant.

The Pacific Group CEO met a man named Sam and his daughter, Alesia, in a party held in 2017 who had brought her daughter to Adefeso so that he could give him some financial advice. The girl explained that she wanted to start her own business, but, it was impossible for her as the student debt loan was of $120,000 and her annual salary was $52,000.

Later, David understands her situation related to many students in America and invested his money to form a smart technology venture powered by smartest software engineers to eliminate the needs of student loans in America. Further, he opened a website named Scootchy.com in 2019 by which he thinks he will be able to able to make education free for students who are underprivileged.