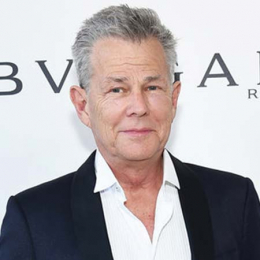 David Foster is an award-winning Canadian musician, record producer, composer, songwriter, and arranger who is famous for his albums like The Best of Me, David Foster, Time Passing, River of Love, and The Christmas Album. He is best known for producing songs for the singers like Josh Groban, Michael Buble, Renee Olstead, and Michael Jackson. He won the 16 Grammy Awards for his musical career from his 47 nominations for the Award.

David Foster is engaged to the famous singer Katharine McPhee. As people say there is no boundaries in the love, David and Katharine is a perfect example of true love as they come with the age difference of 34 years. Moreover, they are celebrating their two years of togetherness as of 2019.

All things started for the duo when they first met in Malibu in May 2017. Ever since then, the pair is together and is enjoying their quality time together. The duo shared the engagement ring on the July of 2018 when David popped out the ring to McPhee and proposing her. Further, McPhee even shared the ring on her Instagram with a beautiful caption,

It’s been a hard week. Lots of tears but I want to thank my friends and family for all the love and support. My dad was so happy for me. My ring was the last thing I showed my dad before he passed and makes me smile when I look at this as a reminder of our last conversation. And now I’m ready to share with all of you what has been my sunshine amongst this painful loss. My love wisely said to me the other day that “death is the only thing that is 100 percent inevitable and the thing we are least prepared for.” So today we’re celebrating life and not forgetting love.

David in his life married for four times searching for the love of his life. First, he was married to the B.J. Cook. The duo shared the wedding vows in 1972 but later separated from the year 1981. After that, Foster married to Rebecca Dyer on October 27, 1982. Just like his first married life, there were many complications in their relationship that made them separate with a divorce in 1986.

Foster, then, married his third wife, actress Linda Thompson in 1991. The duo collaborated together as a songwriting team and shared a wonderful personal and professional bond together. Further, they stayed together for over fourteen years and finally parted their ways in 2005.

Next, the singer married the famous Dutch model Yolanda Hadid in Beverly Hills, California on November 11, 2011.  But unfortunately after staying together for nine years relationship which include four years of marital relationship they divorced in the May of 2017.

Foster is a proud father of his five biological daughters and several stepson and stepdaughters. His first daughter is Allison Jones(1970) whom he placed for adoption in her early days. Further, he became a father while in a marital relationship with his ex-wife B.J with their only daughter Amy S. Foster(1973). Next, Foster with his ex-spouse Rebecca shares three daughters Sara Foster(1981), Erin Foster(1982), and Jordan Foster(1986).

His daughter Amy announced via an Instagram post that she's been diagnosed with breast cancer on 11 June 2019.

You may have noticed that I’ve gone a little dark on social media. I flunked my mammogram recently. I felt a lump and got it checked and yep....Breast cancer. The great news is that I caught it early and although I am getting a mastectomy- I don’t need chemo. In other words I feel so lucky and grateful for this diagnosis which could have easily been so much worse if I had waited. So...if you are a lady out there and you feel something in your boob- go get a mammogram. KNOWING IS BETTER...even if it’s the worst news you can hear. I will leave you with the mantra that so many women revert back to in order to minimize how they are feeling- but in my case, it really is the truth...I’m fine. Still...#fuckcancer

She shared an image of herself during treatment where she explained in the lengthy caption what's going on.

What is the Net Worth of David Foster? Know about his Earnings, Salary

During David's career, he worked in various positions as a musician. In early 1980s Foster used to work as a keyboardist for the pop group Skylark. Later, he formed a band named Airplay with fellow singer Jay Graydon. In his early career, he released many albums like Extra Texture, Lies and Alibis, I Am, and Outside Inside.

Love to drive myself to the airport!! NYC-bound #16citytour #eastcoast

Foster produced many songs and albums for many stars like Josh Groban, Michael Buble, Renee Olstead, Michael Jackson, Barbra Streisand, Donna Summer, and Blake Shelton. until now, he released some of the albums like The Best of Me, David Foster, The Symphony Sessions, Time Passing, River of Love, and The Christmas Album.

Take a look at the Interview of David Foster where he talks about his songs and stories behind them;

Foster married to his ex-wife B.J Cook in 1972 but later separated from one another after 11 years of togetherness the year 1981.

Foster married to Rebecca Dyer on October 27, 1982. Just like his first married life, there were many complications in their relationship.

Foster married his third wife, actress Linda Thompson in 1991. The duo used to share a wonderful personal and professional bond together.

David married his fourth wife, the famous Dutch model Yolanda Hadid in Beverly Hills, California on November 11, 2011.  But unfortunately, after staying together for nine years relationship they divorced in May of 2017.

Foster is a proud father of his five biological daughters, and one of them is Allison Jones who was born in 1970.

Foster is a proud father of his five biological daughters, and one of them is Amy S. Foster who was born from his first wife B.J Cook.

Foster is a proud father of his five biological daughters, and one of them is Sara Foster who was born from his second wife Rebecca Dyer.

Foster is a proud father of his five biological daughters, and one of them is Erin Foster who was born from his second wife Rebecca Dyer.

Foster is a proud father of his five biological daughters, and one of them is Jordan Foster who was born from his second wife Rebecca Dyer.