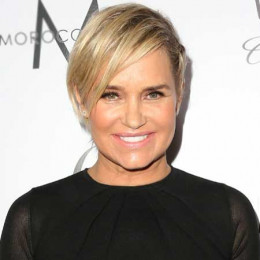 Yolanda Van Den Herik, better known for Yolanda Hadid, is a Dutch-American model turned TV personality. She came to limelight with the reality TV show "The Real Housewives of Beverly Hills." She is a mother of Famous American model Jelena Hadid, Bella Hadad, and Anwar Hadid.

Yolanda Hadid was born on 11th January 1964, Papendrecht, Netherland. Her birth name is Yolanda Van Den Herik. Her father passed away in a car accident when she was just seven and was raised by her mother.

At the age of 16, Yolanda signed a modeling contract with Ford Models by Frans Molenaar, a Dutch designer: as he wanted to replace one of his models and later she was discovered by Eileen Ford.

During that period, she traveled to Paris, Milan, Sydney, Cape Town, Tokyo, New York, Los Angeles and Hamburg for modeling.  She spent 15 years working as a model until she settled down with her family.

After working in the Ford, she got recognized by various media and magazines. She was also cast in American reality TV show an American Housewives of Beverly Hills. The TV show premiered on 14th October 2010.

Moreover, she appeared in Nederlandse Hollywood Vrouwen in 2011 and was last seen in Model Moms in 2017.

After spending 15 years in the modeling field, Yolanda decided to settle down and start a family. She dated Mohamed Hadid, a real estate developer. They married in the year 1994. The couple is blessed with three children: daughter Gigi Hadid and Bella Hadid and son Anwar Hadid. The couple divorced in 2000.

After divorce with the first husband, she married David Foster, music composer, and producer on 11th November 2011. The ceremony took place in Beverly Hills, California. Their relationship lasted for six years and divorced on 24th May 2017.

During 2012, she was diagnosed with Lyme disease. In December, a port was implanted in the arm to help treat her chronic illness. The following year, she underwent surgery to remove the port. Although she healed from the disease, she lost the ability to do activities like reading, writing even watching TV.

Yolanda has successfully collected an estimated net worth $15 million. Her source of income includes acting and modeling. She has got a lavish bungalow designed by herself with a pool in front of the house. She also owns luxurious cars including Escalade and Range Rover.

Yolanda Hadid married Mohamed Hadid, a real estate developer in the year 1994. The couple is blessed with three children: Gigi Hadid, Bella Hadid, and Anwar Hadid. They divorced in 2000.

Later, Yolanda Hadid married David Foster, a musician, composer, and producer on 11 November 2011. The marriage ceremony was held in Beverly Hills, California. After living together for six years they divorced on May 2017.

Born on 23rd April 1995, Gigi Hadid is an elder daughter of Yolanda Hadid. Her birth name is Jelena Hadid. She is a model.

Born on 9th October 1996, Bella Hadid is a second daughter of Yolanda Hadid. Her birth name is Isabella Hadid. She is a model.

Born on 22nd June 1999, Anwar Hadid is the youngest son of Yolanda Hadid. He is also a model.