Home Article Rumored Gay David Muir, host of ABC News is not Dating anyone: No News of Wife or Girlfriend : Know about his career and net worth here

Rumored Gay David Muir, host of ABC News is not Dating anyone: No News of Wife or Girlfriend : Know about his career and net worth here 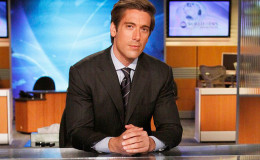 Rumored Gay David Muir is not Dating anyone: No News of Girlfriend or a Boyfriend: Is he getting Married in 2017

He is one of the prominent faces in news and broadcast industry and his applaudable work and devotion for the news industry, especially for the ABC news is highly appreciable. Ladies and gentleman, he's the famous anchor, David Muir.

For such a dynamic personality, getting tagged as a "gay" is quite outrageous. As exposed as he seems on screens, his personal life is pretty wrapped up.

He's not been linked with any woman so far and realizing this many are labeling David Muir to be gay!!

Rumored to be gay many times, Muir, host of ABC News is not dating anyone: No news of wife or girlfriend, leaving all their fans scratching their heads with a big question.

So, today let's take a moment to know all the details about him including his career and net worth.

It's definitely not funny to use the power of media and sources to write about someone's personal life and claim that he/she is your partner.

But the Deputy Editor of Gizmodo Media Group, Gawker Media, Kate Dries has no fear as in one of her article she wrote that David Muir is her BOYFRIEND!!!

So does this mean David Muir is not gay?? 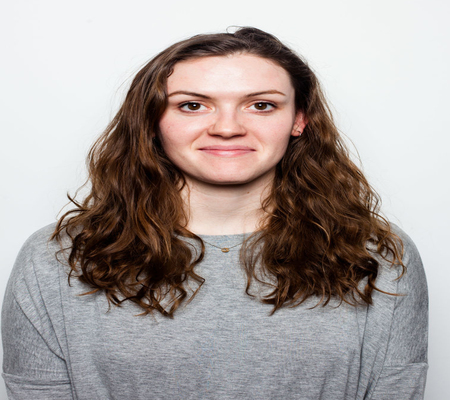 Source: Of A Kind

This sure caused quite a buzz in the media and we're bit confused that whether she's pulling off a stunt for popularity or she's addressing rumors of David being gay by telling people that she's dating him. 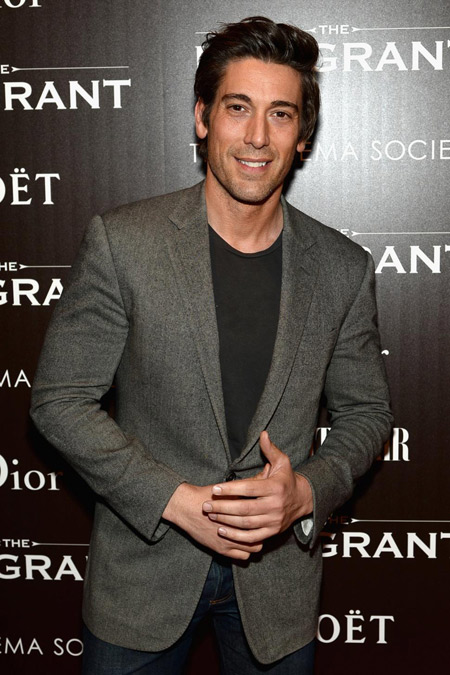 David Muir is rumored to be gay, Source: Getty Images

In her article, she started off stating,

"This is as hard for me to write as it is for you to read, but I’ve just learned—in a public forum, no less—that my boyfriend, ABC News anchor David Muir, is a, quote-unquote, monster."

"David and I connected right from the start. “I thought Peter Jennings was the James Bond of the evening news,” he told me on our first date. I tried to remain calm because (little did he know) Peter was my first love and I didn’t want to make David feel uncomfortable."

She even claimed that the alleged pair has been going on romantic vacations and trips together and she was the one who took pictures of handsome anchor David Muir.

Although Kate boldly stated that she's dating David, David, on the other hand, is tight-lipped about his personal life and super busy interviewing all the renowned personalities including America's President Donald Trump, Hillary Clinton, Mitt Romney and so on.

Coming back to his secret girlfriend, we speculate that David is not dating Kate Dries as both have not come forward together as a couple and perhaps, David is already married and hiding his wife inside the closet, or is he the one hiding inside the closet??

A friend in need sometimes won't be a friend indeed. David Muir and Gio Benitez work together for ABC News and rumors of them dating spread like a wildfire all over the media.

Source report that David, Gio along with his friends were spotted hanging out together and now speculating the pair to be gay! 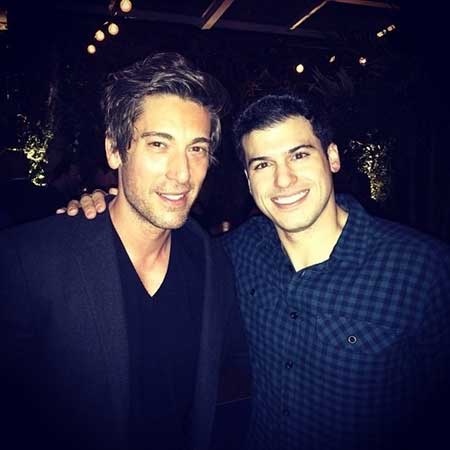 Gio also revealed back in 2014 that Muir is his top three Golden Followers on this Twitter and Gio too has no problem going to gay bars.

Most of the viewers even claimed that Gio and Muir are secretly dating in the studio as when Muir fills in like an anchor, Benitez is always present in the studio and not going on fields for news!

Well until now, neither of them has addressed this rumors and perhaps they don't even have time to publicize this ongoing propaganda.

To clear the air, Gio is happily married to his partner Tommy DiDario since 2016, so it was all just fake rumors.

January 25, 2017, would not be recognized as a normal day for ABC News as on that day, the ABC's hit anchor, David Muir interviewed the most criticized President, Donald Trump. 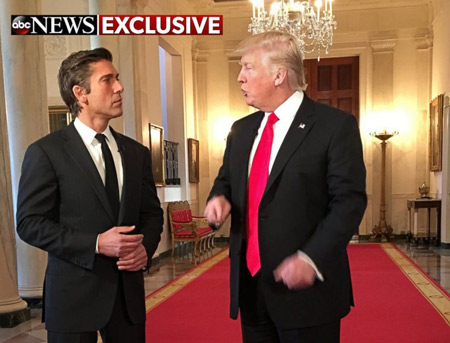 The interview proceeded pretty well and Vanity Fair concludes that the interview made quite clear that Trump is living in his own reality, denying the fact that he's being criticized by all and stated that he doesn't want to change as he knows he will a great president one day.

“I can be the most presidential person ever, other than the great Abe Lincoln."

When Muir asked about voter fraud and millions of votes cast illegally, Trump replied stating that America has people who are illegals, who are in two states and they vote twice which makes votes count in millions.

David also asked about the most famous wall that is about to be built on the Mexican border and Muir sarcastically questioned Trump that who would pay for the wall, would it be the tax payer. Trump responded stating,

"America will get reimbursed. I'm just telling you there will be a payment. It will be a form, perhaps a complicated form."

The interview ended without much discussion and David grabbed spotlight all over the media.

The anchor of ABC World News Tonight, David Muir earns $5 million as his annual salary. He also hosts the show called Made in America, in which they go to random houses and check the origin of all the items.

David Muir is the headline generator for every news he hosts. He's the Emmy Award-winning journalist for ABC News and has reported all the international news and happenings all around the world including Gaza, Tahrir Square, Fukushima, Tehran and so on.

He not only anchors but is also the managing editor of ABC World News Tonight with David Muir. David joined ABC News in 2003 and prior that he used to work as a full-time anchor for WCVB television. 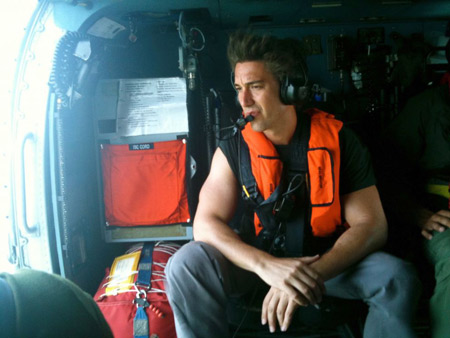 David Muir reporting after the earthquake in Haiti,

David is undoubtedly the most dedicated and talented anchor who has covered major news including Syrian border on child refugees, Breaking Point: Heroin in America, Flashpoint: Refugees.

Not only the toughest but bravest of all reporters, David Muir knows no limits to report news as he also gained access to Guantanamo prison, went to Amman to report on the vetting of refugees to the United States.

He also released his series Made In America that was Emmy-nominated that still remains a hallmark of the broadcast.

After the devastating earthquake in Haiti back in 2010, David covered the entire story from Haiti for days and months and makes a regular visit to Haiti since the earthquake hit.

David Muir's net worth is estimated to be $7.5 million and he earns an annual salary of $5 million.

David Muir owns a Subaru Suv in black worth more than $22 thousand. 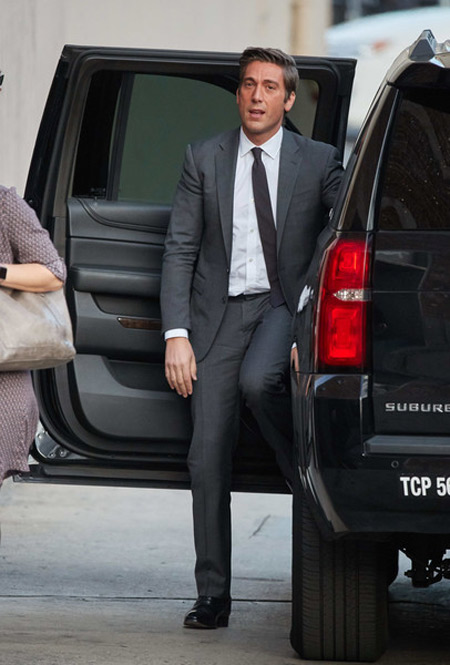 David Muir getting out of his car, Source: Zimbio

He was also accused of several customer complaints where he had to settle the dispute ranging from $1,000 to $43,000. 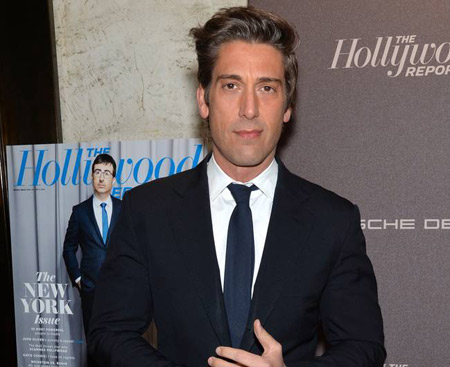 Well, it's quite unbelievable that how can a good-looking and extremely talented reporter is still single. But for now, this is the reality! We hope he gets married soon this year and makes beautiful babies with his lucky wife.