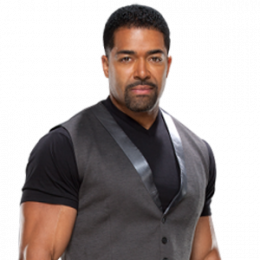 American actor David Otunga is a lawyer, legal advisor and a former professional wrestler of WWE. He was the two-time winner of WWE Tag Team Championship and was the runner-up of the first season of NXT. Otunga is also a commentator and a host Raw Pre-Show.

David Otunga was born David Daniel Otunga Sr. to father Moses and mother, Billie on 7th April 1980 in Elgin, Illinois under the birth sign Aries. Otunga’s educator parents raised him with his two siblings. He is American by nationality and is of mixed race as far as his ethnicity is concerned; his father is Kenyan and mother European American.

In 1998 Otunga finished his schooling at Larkin High School. Later, he earned a bachelor’s degree in psychology from the University of Illinois. Otunga moved to New York soon after his graduation and began working as a laboratory manager in Cognitive Neuroscience Center of Columbia University.

David Otunga made his debut from a reality show, I Love New York 2. In 2013, Otunga starred in the movie, The Call with stars Halle Berry, Abigail Breslin, Michael Eklund, Morris Chestnut, and Michael Imperioli among others. He then appeared in some popular TV series including General Hospital in 2014 and Criminal Minds in 2017.

David Otunga started his wrestling career from November 2008. He signed a contract with World Wrestling Entertainment (WWE)  and debuted in 2009 under the ring name, Dawson Alexander teaming with Jon Cutler and Barry Allen against Camacho, Abraham Saddam Washington, and Derrick Bateman.

From 2010, Otunga began to compete in SmackDown, Raw, and NXT under this real name. In 2010, he won WWE Tag Team Championship twice teaming with John Cena and Michael McGillicutty. After retiring from wrestling he started hosting RawPre-Show on Feb 2, 2015. In June 2016, he left the position and joined commentary team with Tom Phillips for Superstars and Main Event. As of 2017, he is a pre-show panelist for Raw.

David Otunga in 2011 began to engage in his law background after being disbanded with Jerry Lawler due to a minor fight. He was about to file the lawsuit against, Triple H, WWE’s chief operating officer after the advice from John Laurinaitis.

Apart from the legal matter, Otunga began to host the WWE Network’s show, Raw pre-show replacing Alex Riley. By 2016, he joined the team of the commentator with Tom Phillips for Main and Superstar Event. He also joined the SamckDown commentator team with Mauro Ranallo and John Layfield.

As of 2017, Otunga was traded for Byron Saxton as a part of 2017 WWE Superstar Shake-up who was later replaced by Booker T. As of now, he served as a pre-show panelist whereas Booker T as a color commentator.

David Otunga, the former wrestler, came to controversies from his personal relationship. In 2007, Otunga started dating American singer, Jennifer Hudson. The couple got engaged in Hudson’s 27th birthday in 2008, and later they shared a baby together and named him David Daniel Otunga Jr.

Almost a decade later, the couple announced their break up in 2017. Hudson claimed that Otunga harassed her and threatened her multiple times. She was also pushed out of the house by her fiancé, and later she made a statement about the incident,

‘’I am now living in fear of further action David might take.’’

The court then dropped an emergency order of protection for Hudson after several such events. As of now, the custody of their child is granted to Otunga for the temporary purpose due to Hudson busy shooting for the Voice UK and she also visits Los Angeles for the shooting of The Voice.

The 37-year-old actor, David Otunga has a good height of 6 feet 1 inch (1.85m). Currently, Otunga has an estimated net worth of $10 million which he earned from his various professions.

His movie, Call collected $68.6 million at the box office which was originally made with the budget of $13 million.

With such earning, the former wrestler owned a 911 Carrera Cabriolet that worth $103,400.

On 10th August 2009, David Otunga and Jennifer Hudson shared a baby boy together and named him as, David Daniel Otunga Jr. Currently, after the divorce of the parents, Otunga Jr. is living with his dad.