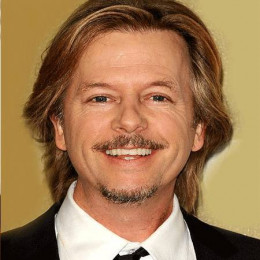 The American comedian and actor David Spade is best known for portraying Dennis Finch in the series "Just Shoot Me!". He has been cast in numerous movies and Television series where he appeared in various roles which showed his versatility. For his talent in comedy, he became a member of Saturday Night Live and grabbed huge attention and fame as a comedian. Spade voiced the character of Griffin the Invisible Man in the animated movie, "Hotel Transylvania".

He had received Emmy nomination & two golden globe nomination for his role in series, "Just Shoot Me!". Spade received a star on Hollywood walk of fame at 7018 Hollywood Boulevard in Hollywood, California.

He grew up with his two older brothers Bryan Spade and Andy Spade who is an entrepreneur and founded brand Kate Spade New York. Spade belongs to English, Irish, Scots-Irish, Swiss-German, Northern Irish and German ancestry. 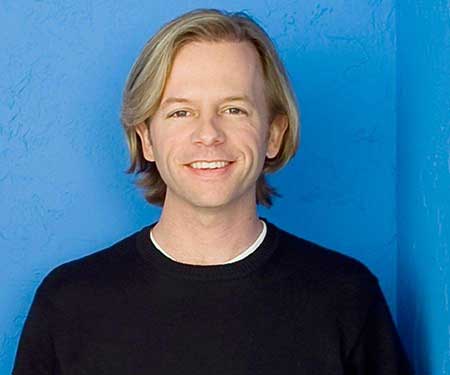 Later on, the family moved to Scottsdale, Arizona. Spade was only four years old. Soon his parents divorced and he along with his brothers were mostly raised by their mother. His mother then married a war veteran who committed suicide later on. As for schooling he enrolled at Saguaro High School and for college chose to study at Scottsdale Community College.

He then transferred to Arizona State University and in 1986 gained his bachelor degree in business. Spade was into comedy earlier on and used to perform stand up sketch from time to time. He performed on Farce Side Comedy show which is the university's long-running sketch comedy show.

David Spade is professionally an actor and Comedian who debut in the entertainment industry in 1987 from the movie Police Academy 4: Citizens on Patrol where he portrayed Kyle. After his debut, he appeared several movies like Light Sleeper, Lost & Found, The Benchwarmers, Jack & Jill, Grown Ups 2, The Ridiculous 6, The Do-Over and so on.

For his role in the 1995 movie, Tommy Boy he won MTV Movie Award for Best On-Screen Duo. Similarly, he got nominated for Kid's Choice Award and Teen Choice Award for movies, The Emperor's New Groove & The Benchwarmers respectively. Spade has voiced in many movies like Hotel Transylvania franchise where he voiced the character Griffin the Invisible Man and also voiced Emperor Kuzco in 2005 animated movie, Kronk's New Groove. 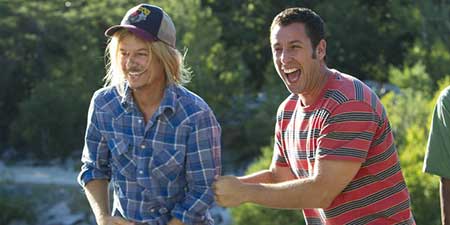 In 2017, he was cast in movies Mad Families which he wrote himself and Sandy Wexler where he appeared as himself. His 2018 project include animated movie Hotel Transylvania 3 and another comedy movie, Father of the Year.

As for his Television or small screen debut, it happened in 1988 when he featured in an episode of the series, The Facts of Life. He has been cast for an episode of many series like Baywatch, ALF, Father of the Pride, Hot in Cleveland, Entourage, Crowded, Real Rob and many more. In the 1997 series, Just Shoot Me! he portrayed Dennis Finch and was seen in 149 episodes till the end of the show in 2003.

For his appearance in the series, he won several nominations like Primetime Emmy Award, Golden Globe Award, and American Comedy Award. His talent in comedy and with the help of his friend Dennis Miller led him to be a part of Saturday Night Live in 1990. He was the part of the show till 1996. 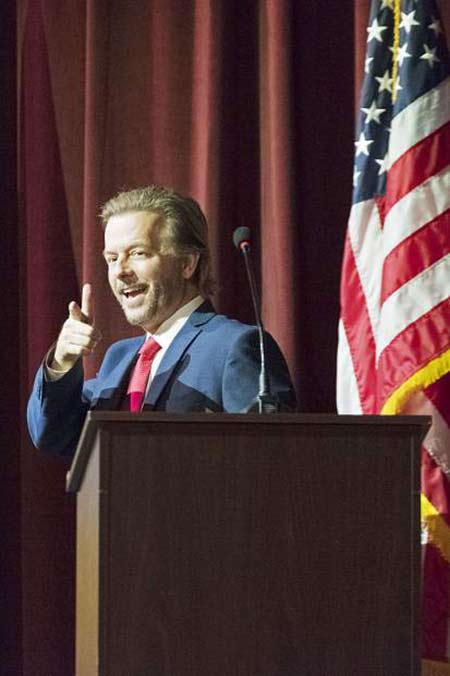 David Spade in the series, The Mayor.
Source: Aspen Times

He has appeared in 70 episodes of the show and writes pieces for the show for which he was nominated for Primetime Emmy Award. Spade was cast in the American Television series The Mayor where he played the role of Ed Gunt for seven episodes.

David Spade is estimated to have a net worth of $40 million and $60 million according to The Richest and Celebrity Net Worth. He took home a salary of $150k per episode for the series Rules of Engagement.

Spade donated $100,000 on December 2005 to the police department of Phoenix which helped provide firearms for the police officers. He also donated $200,000 for the Oklahoma tornado relief program, $100,000 to the ALS Ice Bucket Challenge and $100,000 to National Alliance on Mental Illness on 2018. Many of his movies are a big hit in the box office.

The comedian & actor David Spade is not rumored to be dating anyone at the moment. He is residing in his property in Beverly Hills, California. Previously he had been in a relationship with several actresses. He dated actress Kelli McCarty, Lara Flynn Boyle, Brittany Daniel, Jasmine Waltz (2011) and Jillian Grace (2007). The actor has a daughter with model Jillian Grace named Harper who was born on August 26, 2008.

Spade is referred to as the bachelor-era George Clooney of the Comedy World. Spade also dated Teri Hatcher, Julie Brown in 2002, Heather Locklear in 2006, Nicky Whelan in 2007.  In 2017, Spade was seen sharing PDA moments with Glee star Naya Rivera but they separated pretty soon. The news was finalized after he was seen kissing a mystery woman in Los Angeles.

Spade is a commercial spokesperson for capital one credit cards and Sierra Mist soda. On September 5, 2003, he was awarded a star on the Hollywood Walk of Fame at 7018 Hollywood Boulevard in Hollywood, California. Earlier on he worked as an employee at a skateboard shop, and also as a busboy, and valet parker. His acting mentor is George Segal.

He has a tattoo of a cartoon character called Calvin. He stands at a height of 5'7 feet. Besides he is said to be sensitive towards sunlight. There are no controversies related to him but he was robbed and attacked with a stun gun by his personal assistant, David Skippy Malloy on November 29, 2000.

Here is a video of David Spade's interview on the Jimmy Fallon show.