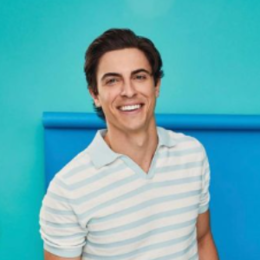 Derek Klena is an American actor best known for making headlines in New York in the high-profile revival of Carrie. He is in the entertainment industry for the past eleven years.

Is Derek Klena Married? Who's His Wife?

Derek Klena is a married man. The broadway star proposed to his longtime girlfriend, Elycia Scriven, for a wedding in September 2018. The lavish wedding took place in an oceanside ceremony in Gualala, California.

Around 50-100 guests attended the couple's wedding, which a limited number of Hollywood stars enjoyed thoroughly. Derek had met the love of his life at the University of California, Los Angeles. After dating for several years, the pair got engaged in October 2017.

Most recently, the pair celebrated their fourth wedding anniversary on September 16, 2022. As a loving husband, Klena does not lag in flaunting his affection for his wife Elycia on networking sites, including Instagram. 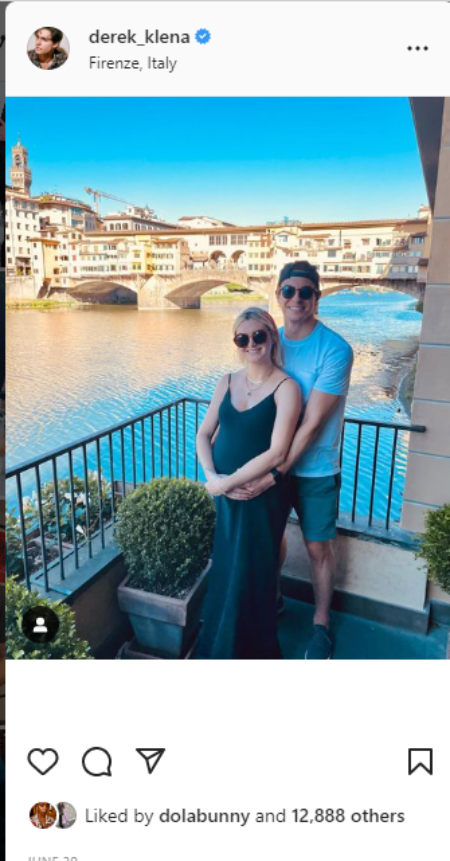 Derek Klena has been married to his wife, Elycia Scriven, for three years. SOURCE: Instagram

Klena lately resides with his wife Elycia and their son Dax Arthur at their home in Los Angeles, California. On April 20, 2022, Derek uploaded a picture of himself kissing his wife's belly before the lovebirds showed off the sonogram.

Derek Klena welcomed a son Dax Arthur Klena on September 8, 2022, with his wife, Elycia. The pair announced the birth of a child via Instagram on September 13. he is nearly two months old. 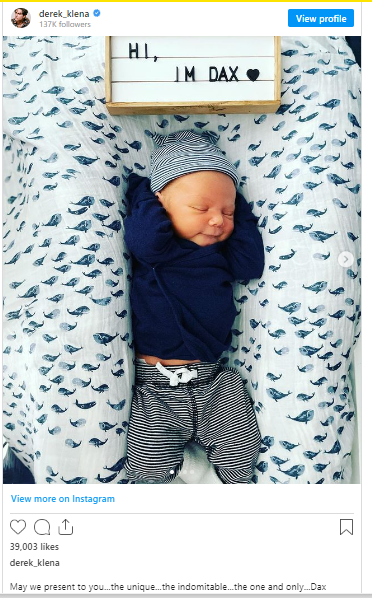 The Broadway show star shared snapshots of the newborn, a family photo captured at the hospital, and welcoming Dax home. On that very day, Klena wrote in the caption, "We are beyond love with this little nugget.

Thankful to have a happy, healthy mama and a sweet baby boy. He added, "Watching you @leeshsquabeing a mom and bringing our boy into the world makes my heart melt. We are so lucky to have you.

Derek Klena has an estimated net worth of $1 million as of 2022. A broadway actor in the US makes somewhere between $58,537 and $86,730 depending on their experience. As an on-demand actor, he receives a decent paycheck from a successful acting career.

Some of Klena's highest-grossing projects include Dogfight, Law & Oder: SVU, Blue Bloods, PLL, and The Code.

Klena makes enough to maintain a quality life with his spouse and kid. The couple also spends money on traveling and purchases branded outfits. Derek owns a beautiful family home in Los Angeles, California, worth around $428,700.

Derek Klena played the recurring character of Wes in 2022 hit HBO show Pretty Little Liars: Original Sin. Other than that, he has starred in series such as The Carrie Diaries, Law & Order: SVU, Unbreakable Kimmy Schmidt, Last Week Tonight with John Oliver, The Code, and The Tomorrow People.

Klena has made her debut in the stage show Hairspray as an ensemble at Hollywood Bowl. In 2012, the actor landed the role of Tommy Ross in the 2012 stage show Carrie and Eddie in Dogfight. Klena's other stage acts include The Bridges of Madison County, Diner, Anastasia, Moulin Rouge, and Jagged Little Pill.

Derek Klena has starred in several Broadway shows, such as Fiyero in Wicked, Dmitry in Anastasia, and Michael in The Bridges of Madison County. His other Broadway show includes Unknown Soldier, Hairspray, Jagged Little, and Diner.

Klena played the character of Eddie Birdlace in the musical "Dogfight," which opened off-broadway at Second Stage theatre on July 16, 2012. Joe Mantello directed Nancy Savoca's musical adaption of the 1991 film with Christopher Gattelli.

The production earned positive reviews, especially for leading lady and Tony Award winner Lindsay Mendez. Dogfight was a story taken from the book by Peter Duchan. The series centers on Derek, a U.S. Marine who gets dragged into a brutal competition by his fellow Marines to watch who can invite the ugliest date to a party.

Derek Klena was born in San Dimas, California, on October 3, 1991. He went to South Hills High School. Later, The actor graduated from California University in Los Angeles. During the first year, Klena played baseball before pursuing an acting career.

Klena grew up with his two younger siblings in West Covina, California, across Los Angeles. His brother Dillon is also an actor who played Nick Healy on Broadway. Derek studied theatre but switched his major to psychology.

Elycia Scriven and Derek Klena are happily married for four years. They exchanged vows in September 2018.