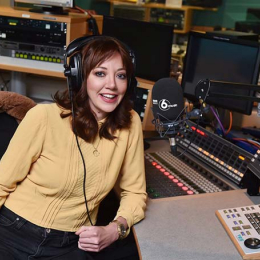 Famous English actress, Diane Morgan is popular for her acting skills, comic timing and writing as well. She is a versatile persona and works as an active actor, comedian, and Writer. She is most recognized for working in the Netflix series named After Life. She is also popular as the writer of Cunk on Everything: The Philomena Cunk Encyclopedia.

Personal Life of Diane Morgan; Is she Dating?

Diane Morgan is in a dating relationship with a BBC comedy producer Ben Caudell. The duo is in a happy relationship and lives together in Bloomsbury, London. Moreover, they are open about their relationships but prefers to stay far from the media.

Famous British actress Diane Morgan and her partner Ben Caudell in an event.
SOURCE: The Guardian

Morgan is out of any dating rumors and controversies regarding her past life. Moreover, it seems like she shares a strong romantic relationship with her partner as there is no sign of breakup between them.

How much is the Net Worth of Diane Morgan? Also, Know About her Career.

The 43-year-old actress is currently working in the Netflix black comedy series named After Life as Kath. Besides, she started her acting career in 2013 by appearing in the TV series Pat & Cabbage. After which, she appeared in the number of television series like Utopia, Drunk History, Rovers, Mount Pleasant, and Motherland.

The Netflix actress also tried her hands in the film industry and by working in the David Brent: Life on the Road. Before that, she also appeared in a short film named The Boot Sale in 2010.

Except working as an actor and writer, Morgan also works as an active writer. IN 2018, she wrote an encyclopedia named Cunk on Everything: The Philomena Cunk Encyclopedia with the perspective of the character Chunk. The writing was published by Two Roads on 1 November 2018.