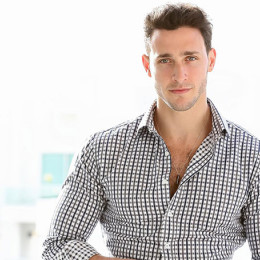 Grabbing limelight is easy when you are equally qualified in terms of your looks and education. Well, Mikhail Varshavski is also one of those people who caught the media attention because of his looks and also his profession. The Russian-American doctor is stated as the "Sexiest Doctor Alive" by the famous magazine People. He is also recognized as one of the famous social media sensations who is popular on both Instagram and YouTube.

Mikhail Varshavski aka Dr. Mike shares amazing chemistry with his long-term girlfriend. Are you waiting to know Mikhail's current relationship status and his affairs?

DR. Mike aka Mikhail Varshavski was reportedly in a relationship with rumored girlfriend, Betsy Alvarez, a Cuban Instagram star. Mike and Betsy were said to have been romanced since the fall of 2019. She is from New York City.

Doctor Mike and his newfound love were spotted together at the "Night Sweats" New York premiere on November 13, 2019. That's not all, the two were seen holding hands, getting cozy at a number of private events and premieres including the 11th Annual Short Awards.

However, it was later reported that Mike and Betsy never dated and were just friends. It's also safe to say that the two couldn't build strong chemistry. Not to mention, Mike and Betsy also no longer follow each other on Instagram.

Meanwhile, as of December 2021, Varshavski is said to be single after countless failed romances. The Russian beauty is also not fond of disclosing his love life in public. Ironically, that's the main thing his fans and millions of followers on Instagram want to find out the most.

Has Dr. Mike found Someone New in his life?

Not just Pia, the Sexiest Doctor Alive once found someone special in his life. For instance, Dr. Mike was dating the famous Fox News reporter Jennifer Lahmers. He was in a relationship with Jennifer Lahmers till mid-2019.

The duo was quite open about their relationship and didn't hesitate to share their pictures together. Dr. Mike and his girlfriend share a good bond and are often spotted in many events and programs together.

Mikhail and his sweetheart, Jennifer both were captured in many events. Just take a quick look at their picture which Jennifer shared on her Instagram while working on The Bowery Mission.

Big thanks to @bowerymission for letting us help serve meals today. Made a lot of new friends and got to meet some of the 650 volunteers who've served up 11,000 Thanksgiving meals this week to the needy. Happy Thanksgiving everyone! @doctor.mike #bowerymission #thanksgiving #nyc

The couple looked pretty much happy together and it wasn't a surprise if Mike and Jennifer would share the wedding vows. Being a super handsome boyfriend of the gorgeous girlfriend Jennifer, they both looked stunning together and some of their fans were also so jealous of their amazing match.

Post Mikhail's split from an ex-girlfriend, he was seen celebrating Christmas and New Year's Eve with Lahmers in New York City. Most notably, the 30-year-old prefers to spend a good time with kids (patients) while in the meantime. He and Jennifer united for over three years now, and yet they enjoy one another's company.

The hunky doctor was previously dated famous Miss Universe 2015, Pia Wurtzbach. The duo dated each other for a couple of years and shared many memories together. Varshavski and Wurtbach kindled their relationship right after she was crowned Miss Universe.

Moreover, the news of their relationship was opened for the media when Pia admitted to dating Mike on April 15, 2015, in an interview on Tonight with Boy Abunda. Although they shared a good bond, the pair decided to choose a separate path and move on.

Talking about relationships and dating, he said,

‘Doctors are very popular with women.'

‘The field of medicine is one you have to have a lot of dedication to enter.'

‘It shows you’re really committed, and that’s one of the most important factors women look for in a relationship.’

Just like Mikhail, Jenner was previously in a relationship but it was not just dating as she was married. Wanna know with whom?  She was married to the well-known former assistant golf pro, Jamie Bosworth in 2011 but they divorced soon due to some personal differences.

The famous doctor loves to go on vacations and spend his time with small children and animals. He often shares many posts on his social media accounts with a wide variety of animals.

What is Mikhail Varshavski Net Worth?

Mikhail Varshavski holds an attractive net worth of $1.2 million. There is no wonder that he amassed his great fortune. He is able to add thousands of dollars to wealth from his career as a medical practitioner.

The 29-year-old hunk possesses a net worth of as the salary of an Osteopath, a doctor is $208,000. Moreover, the famous celebrity doctor is also working on various projects.

Varshavski generates over $3 thousand in revenue and makes $1,1 million per annum solely from advertisements. As of late 2019, Mike has amassed over 4.6 million subscribers on his YouTube channel with more than 20 million views per video.

Dr. Mike owns a number of luxurious sports cars and bikes as he loves speed. In July 2016 he shared a picture of Ferrari 458 Italia which has a market price of $230,000. Similarly, he owns one Harry Potter Watsonian Wizard bike, BMWi8 ($148,500) and some more.

In addition, Mike is an animal lover and owns a couple of dog pets which includes a Siberian Huskey named Roxy and a Newfoundland dog named Bear Varshavski. Both of them cost around $600-$1300 and $1000-$2000 respectively.

The Russian internet celebrity took a picture of his new blue r8spyder car on Instagram. He captioned

Childhood dreams do come true..Just not by accident... #hardworkpaysoff #r8spyder

Mike's latest r8spyder car cost around $138,700 in 2019. All in all, the YouTuber is very much close to a blind YouTube celebrity Molly Burke.

In the year 2015, Mikhail established a foundation named Limitless Tomorrow which works to provide scholarships to students. He shares his experiences in his social media accounts and raises money by auctioning them.

Sometimes I like to go fast 458 Italia #toy #car #beast

Afterward, in 2016 he worked with a dating app Coffee Meets Bagel in which he used to take $10 raffle for a date with him and until now the campaign raised over $91,000 for the foundation.

Mikhail Varshavski was born on 12 November 1989 in Saransk, Russian SFSR, Soviet Union(Russia). He holds both Russian and American citizenship and is of Scorpion birth sign.

His father worked as a physician and his mother as a mathematics professor.  His family moved to Brooklyn when he was at the age of 5 after that his mother used to work sweeping floors whereas his father attended medical school for the second time.

Varshavski decided to become a doctor after seeing his father's relationship with patients. He was named Doctor Mike by his high school friends as his father was a sports club physician.

He applied to the New York Institute of Technology and studied a seven-year combined track for a bachelor's degree in life sciences and a degree in osteopathic medicine to become a doctor.

While @thebearpup is in training @roxy.husky is doing her best to keep me company #sleepy #husky #puppy

In 2014, he completed his studies and started working at Atlantic Health System Overlook Medical Center's Family Medicine program. While working in the same program his mother died because of leukemia and he returned back to his father and brought him a Huskey.

The 29-year-old doctor joined Instagram for the first time in 2012 to explain his life as a medical student. He was a shy person while being in high school and admitted to reading the book How to Win Friends and Influence People to impress girls.

In addition, Mike grabbed media attention for the first time in August 2015 when the Internet media magazine Buzzfeed published an article about him.

The article was titled ''Um, You Really Need To See This Hot Doctor and His Dog" which was based on the chemistry of the doctor and the dog. Soon, in November he was named 'the Sexiest Doctor Alive' by the famous magazine named People.