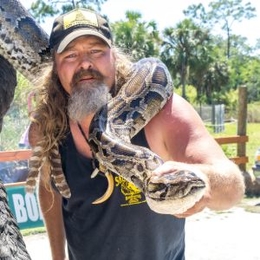 Dusty Crum is an American snake hunter who has years of experience in catching big snakes and python in the Everglades. The Floridian shot to fame after appearing as one of the participants in the reality series Swamp People.

Is Dusty Crum's A Married Man? What Is His Relationship Status?

Dusty Crum is in a romantic relationship with his girlfriend, Natalee McKinney. His lover McKinney is also the bounty hunter's teammate and business partner. 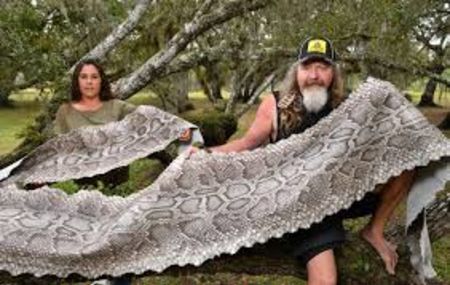 Dusty Crum is in a longtime relaitonship with his girlfriend, Natalee McKinney. SOURCE: Plambeachpost

The duo shares an excellent relationship both on and off the screen as they work together in catching snakes and running their business.

Dusty and Natalee has not been hitched yet, but they have been in a relationship for many years, so it might not be distant.  Both of them are not active on social media platforms and prefer to keep a low-profile lifestyle.

On A Mission To Save Everglades

The natural region of the southern part of Florida, also known as the Everglades, is a beautiful dense forest with rich biodiversity. But unfortunately, due to the invasion of these slithering predators in the Everglades in the past few decades, between 67 and 99 percent of the region's mammal population has disappeared and caused an enormous disbalance in the ecosystem.

It might sound a bit surprising, but as one of the famous python hunters in the US, one of his least favorite parts of the hunt is euthanizing the snakes.

Not long ago, hunters used to bring them back alive and have the Florida Fish and Wildlife Conservation Commission take care of them. Now, Dusty revealed hunters are required to kill them in the field, which Crum does not likes to do.

The bounty hunter says he finds someone else to do it. He stated he was never a hunter and said, "hunts with a camera instead of a gun."

But he assures none of the snakes goes to waste and wants to be respectful of God's beautiful creatures. Dusty eats the meat and described that the snakes' meat tastes like gator, but less fishy.

As for the bones and skin well, there is one way to best use it, i.e., to make accessories from it. The snakeskin is used in making jewelry accessories, purse, bags, and other stuff. Oh, and don't worry if you want to buy anything made out of snake as the reality star is the owner of a shop Orchid Envy located in Venice where he sells all the products.

In May 2017, Dusty Woldman Crum caught one of the most massive pythons ever caught on record. The snake measured 16 feet, 10 inches, and weighed 133 lbs. Furthermore, it was a female pregnant snake and had 73 eggs. 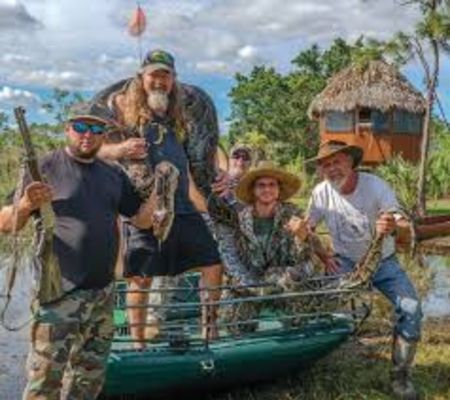 A few months later, he succeeded in capturing and killing a huge python. The reptile was 16 feet 11 inches and weighed 122 lbs, which broke his previous record by an inch.

From his career as a python bounty hunter, he has a net worth of $200,000 from his profession. In comparison, former "Basketball Wives: Los Angles" star Draya Michele holds a net worth of $600,000.

Check out the clip of Dusty Crum in "Swamp People"!

Dusty appeared in season 10 of the American reality series "Swamp People." In the hit show, he shared the screen alongside Jacob Landry, Troy Landry, William Willie Edwards, Terral Evans, Ashley Jones, Ronnie Adams, Daniel Edgar, and many others. The hit series is currently airing its eleventh season on the History channel.