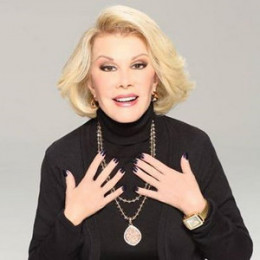 Edgar Rosenberg was a German-born British film and television producer based in the US. He is mostly known as the husband of a famous comedian, Joan Rivers. When he was a small boy, his family emigrated from Germany to Denmark and then South Africa in order to escape the Nazis. He served as Rivers' manager for most of their projects and was a producer on The Late Show Starring Joan Rivers, on the newly formed Fox Television Network.

Rosenberg married comedian and commentator after hiring her to work with him in Jamaica rewriting a screenplay for a joint movie deal with his friend Peter Sellers. Edgar Rosenberg was found dead in the room of the Four Seasons Hotel in Philadelphia on August 15, 1987. Rosenberg reportedly overdosed on Valium, left a suicide note, and left three tapes with messages he recorded on them. One was for Joan, one for his daughter, and one for his business manager.

Edgar Rosenberg was born in 1925 to Jewish parents in Bremerhaven. During his childhood, his family emigrated from Germany to Denmark and then South Africa in order to escape the Nazis. He attained his education in England at Rugby School and later at the Cambridge University.

Rosenberg moved to the United States as a young man and rose to become an assistant to Emanuel Sacks, only to get fired. In the 1960s, he worked for a public relations firm run and was a valued news source for journalists.

Rosenberg married Joan Rivers in July 1965. Joan was a comedian and commentator by profession. The wedding took place just four days after hiring her to work with him in Jamaica rewriting a screenplay for a joint movie deal with his friend Peter Sellers. The couple shared one daughter named Melissa Rivers.

Several months after Fox fired Rivers, and shortly after Rivers and he had divorced, Rosenberg committed suicide in August 1987 by overdosing on prescription drugs in a hotel room in Philadelphia, Pennsylvania.

Edgar had been suffering from clinical depression. His spouse Joan Rivers believed it was brought on by medication he had been taking since suffering a heart attack in 1984. Upon Rosenberg's death, Nancy Reagan was the first person to call Rivers. She arranged for his body to be moved from Philadelphia.

Edgar Rosenberg's net worth was not revealed to public knowledge. His source of income included his salary and earnings from his career as a film and TV producer.

Rosenberg married Joan Rivers in July 1965. The couple had one daughter together. In August 1987, several months after Fox fired Rivers, and shortly after Rivers and he had separated., Rosenberg committed suicide.

Melissa Rivers was actually born Melissa Rosenberg. Joan and Edgar’s daughter Melissa was actually the one who was first notified of her father’s death.