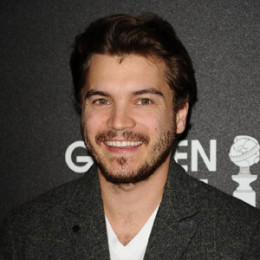 Emile Davenport Hirsch is an actor, widely known for his roles in Lone Survivor, Lords of Dogtown, The Emperor's Club, The Girl Next Door, Alpha Dog, Speed Racer and the Sean Penn-directed film Into the Wild. In 2008, he was placed no.17 on Entertainment Weekly's '30 Under 30' the actor's list.

The widely celebrated actor, Emile Hirsch is yet unmarried but is the proud father of a son, Valor Hirsch. The 34-year-old and his partner welcomed a son at age 28 in October 2013 at Florida Hospital.

The controversial actor who quickly rose to the spotlight after Into The Wild is best known for keeping his love life close to his vest. Oddly enough, Hirsch has promised himself to never open up the real identity of his baby mama (spouse) nor his son to the public.

The handsome hunk who is active on socials like Instagram optionally shares any snaps or videos of his son. News had it that, Emile and his sweetheart already parted ways before he realized about her pregnancy. Some sources claim that Hirsch was still there to financially support his then-pregnant girlfriend.

Till now Emile has been through many dates and breakups and he has raised a son from one of his affairs. Whilst the mother of Valor Hirsch's identity might not be clear to the public, the actor's romantic affair with several other women break headlines though.

Emile had been romantically linked to some of the actresses like Juno Temple (2011), Ellen Page, Amanda Seyfried, and Anna Sophia Robb.

Emile Hirsch was accused of putting a female studio executive in a chokehold at a Utah nightclub during the Sundance Film Festival. On 12 February 2015, the Wild Irish star was sued with aggravated assault post initiating an altercation with and also strangling to the state of unconsciousness.

Similarly, on 17 August 2015, Emile asserted guilty to misdemeanor assault and spent 15 days in jail. At the time, he was fined $4,750 and experienced 90 days of probation. That's not all, he was even ordered to take 50 hours of community service.

What is Emily Hirsch's Net Worth?

Emily Hirsch has an estimated net worth of $16 million as of January 2010. The 34-year-old receives a salary of $3million to $8 million per year for appearing in movies and TV shows.

Allegedly, the Girl Next Door star weighed about 156 pounds while he got the part. Later, he lost the 26 pounds to get in shape for the film. Slowly,  Hirsch weighed 115 pounds for the weight loss amid the Alaska segment.

Emile Davenport Hirsch aka Emily Hirsch was born on March 13, 1985, in Topanga, California, United States. The actor spent his childhood days in the suburbs of Palms, Los Angeles. He is of Scots-Irish, English, and German Jewish ancestry.

The actor's mother, Margaret Esther is a visual artist, teacher, and pop-up book designer. His father, David Milton Hirsch is a producer, manager, and entrepreneur. Emile has an elder sister, Jennifer.

Be sure to check out Marriedwiki.com!!

He is the only child of Hirsh. Details about his mother has been kept secret.