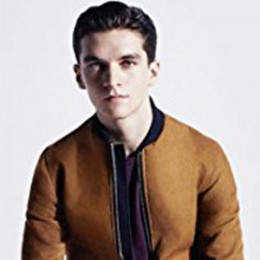 Fionn Whitehead, an English actor who is popularly known for his significant roles in the war movie, Dunkirk for which he was really praised and eventually rose to fame. He started appearing on TV from the age of 19 after working in the mini TV series, Him.

Fionn Whitehead was born on 18th July 1997 in England with the birth sign Cancer. He is a British and belongs to White ethnicity. His parents, Linda and Tim, raised Whitehead along with his siblings: two sisters Maisie, Hattie and a brother, Sonny. His parents named him after the folk legend, Fionn mac Cumhaill as both of their parents was a jazz musician and a true music lover.

Whitehead graduated from Richmond College. He used to work in a London Coffee Shop before pursuing his career in acting. Right from the very early age, he was interested in acting so joined National Youth Theater Summer Course. When he was at the age of 13, he participated in the Orange Tree Youth Theater in West London.

Whitehead debuted from the TV series named, Him in 2016 along with the cast members Katherine Kelly and James Murray. His hard work in his first series won him roles in many other films.

One of his famous movie which he did in 2017 is Dunkirk, a war film for which he spent almost two weeks in a boot camp to get prepared for the role. During the making of the movie, he became close to the former member of 1D, Harry Styles. It was appreciated by the audiences and critics and earned the box office collection of $523.9 million.

Whitehead grabbed much of the fan following from his fantastic acting in the movie. Moreover, during the same year, he was also cast in the film, The Children Act by Richard Eyre and even in the TV series, Queers. As of now, he is working for his next movie named, Caravan.

Whitehead, the dashing actor, is private regarding his personal life. He has disclosed only limited information about him. Due to which the audiences started comparing him to his character in the films. His 2017 series, Queers and a series depict monologues that present the perspectives of gay men and women which made the audiences suspicious about his sexuality.

Also, it is just his character so, neither he is a gay or bisexual but is straight. Talking about his relationship status, he is currently single and has no girlfriend. Till now, there is no information about him dating any of the ladies.

It’s surprising that a guy with such a nice personality is still single or maybe he is just hiding his love life from the media.

Whitehead is currently at the age of 20 is rising star today and has already collected a decent net worth of $4 million. His worth is sure to increase in the future seeing his hard work and dedication.