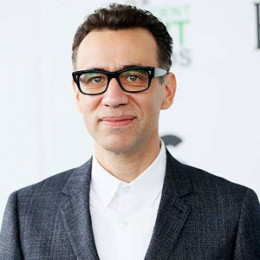 Fred Armisen is the well-recognized name in the TV and film industry. He is an Ameican actor, comedian, voice artist, musician, producer and screenwriter most praised for his work on Late Night with Seth Meyers, Saturday Night Live and Anchorman: The Legend of Ron Burgundy.

Fred Armisen was born on December 4, 1966, as Fereydun Robert Armisen in Hattiesburg, Mississippi whereas grew up in Valley Stream New York. He is the son of Fereydun Armisen, an IBM employee and Hildegardt Mirabal, a school teacher.

Armisen went to the school of Visual Arts in New York City and soon dropped out to be a rock drummer. He had a keen interest in performing as a child.

Fred began his career as a drummer of a local band along with his high school friend in 1984. In 1988, he joined punk rock band Trechmouth in Chicago. He then played background drums with Blue Man Group followed by three tracks for Les Savy Fav’s album Let’s Stay Friends in 2007.

In 2002, he featured on the show Saturday Night Live. The show gained him huge fan followings along with the name and fame. He portrayed the popular personalities such as Barack Obama, Queen Elizabeth, Martin Scorsese, Tony Danza and Iranian President in the show. He then made his appearance in comedic series The Sarah Silverman Program and 30 Rock.

He lent his voice in film series Smurf and featured in animated TV shows Aqua Teen Hunger Force and Squidbillies. He alongside his comedy partner Carrie Brownstein and director plus co-writer Jonathan Krisel, performed in IFC comedy sketch Portlandia. They eventually founded a website featuring the comedy sketches namely ThunderAnt.com.

Portlandia earned him the nomination for an Emmy Award for Outstanding Writing Variety Series in 2012, 2013 and 2014 and also for Outstanding Supporting Actor in a Comedy series in 2014. In 2008 and 2011 he won Peabody Awards as a part of the Saturday Night Live political satire cast and for Portlandia.

The 50-year-old Fred has married twice and his current girlfriend is actress Natasha Lyonne. The duo made their affair official in 2014. They are often seen hanging spending quality time together.

Armisen was previously married to actress Elisabeth Moss in 2009. They eventually split up in 2011. His first wife is English singer and song writer Sally Timms. He married Sally in 1988. Their marriage lasted for six long years and they divorced in 2004. From both his marriages he didn't have any children.

As a comedian, actor, voice artist, musician, producer and screenwriter Fred earns a huge salary. He holds the staggering net worth of $8 million.

Sally Timms is the first wife of Fred Armisen. They got married in the year 1988 and divorced in 2004.

Elisabeth Moss is the second wife of Fred Armisen. They married in 2009 and split up in 2011.