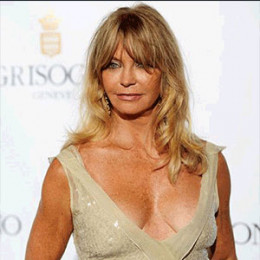 An actress and a producer Goldie Jeanne Hawn or mostly known as Goldie Hawn made her debut as a dancer in her feature movie The One and Only, Genuine, Original Family Band. Goldie has been involved with a number of men throughout her career.

An actress and a producer, Goldie Jeanne Hawn or mostly known as Goldie Hawn was born on November 21st, 1945, in Washington D.C. She was born to Laura Hawn her mother and Edward Rutledge Hawn her father. Goldie Hawn is an American by nationality and White by race/ethnicity.

Goldie Hawn had begun to take ballet and tap-dancing lessons when she was three. And by the time she was 18 years old, she had apparently dropped out of Washington, D.C.'s American University and started her own ballet school. She frequently appeared as a professional dancer in performances throughout New York City and abroad.

In the year 1968, Goldie Hawn made her debut as a dancer in the Disney's feature film 'The One and Only, Genuine, Original Family Band', it was here that she met her future companion, American actor Kurt Russell.

The bubbly and infectious actress had won an Academy Award for the Best Supporting Actress for her performance with Walter Matthau in Cactus Flower (1969). Furthermore, she had shown her versatility as an actress, when she had given a well-reviewed dramatic performance in Steven Spielberg's 1974 movie 'The Sugarland Express'.

Goldie Hawn has also been a TV actress and made her debut in the sitcom 'Good Morning, World'. She had become really popular through her roles in Rowan and Martin's TV review 'Laugh In' from 1968 to 1970, which earned her two Emmy Award nominations along the way. As a matter of fact, she has even hosted several variety specials for CBS and ABC.

Goldie Hawn had returned to the big screen after 15 years later co-starring with Amy Schumer in the 2017 mother-daughter comedy movie 'Snatched'.

Goldie Hawn has been extremely successful in her career as an actress and she has a lot of things to show for her success. She has been rewarded for her movie's success with several high profile nominations and she has also won four awards in the process.

Apart from awards, Goldie Hawn’s net worth has also served as a pointer to the fact what she has attained in her career. Goldie Hawn’s current net worth is estimated to be a staggering amount of $60 million as of 2018.

The multitalented actress Goldie Hawn has been involved with a number of men throughout her career. Goldie Hawn and Kurt Russell have been partners since Valentine's Day 1983 and they also have a son together named Wyatt Russell.

The couple met while filming The One and Only, Genuine, Original Family Band in 1966.

It's been three decades and the former co-stars still remain the cutest celebrity couple till date. They celebrated 35th anniversary in February 2018 and the 36th anniversary is not so far!

Their relationship is without troubles, however, the two once talked about separations, but soon resolved their differences and have stayed together ever after. Though she had two marriages prior to her relationship with Kurt several other romantic affairs.

Before fame, she dated the actor Mark Goddard. She first got married in the year 1969 to a dancer and later a director named, Gus Trikonis. Their wedding was a lavish ceremony in Honolulu, Hawaii and they stayed married for about four years till 1973. However, they didn’t file for divorce until 1975 and by 1976 they finally became legally divorced.

Before their official divorce, she dated three other men. She had a romantic affair with stuntman Ted Grossman before dating Swedish actor, Bruno Wintzell and finally Italian actor Franco Nero.

Goldie Hawn's second husband was a musician named Bill Hudson. She had met Bill of the Hudson brothers in a flight from New York to Los Angeles. Later in the year 1976, the pair got married after she was legally divorced from her first husband.

The couple shares two children together, Kate Hudson and Oliver Hudson. Unfortunately, they got divorced in the year 1980, and the actress went on to date French actor Yves Rénier. Her dating conquest also involved Tom Selleck and Victor Drai.

It makes my heart so happy to announce the launch of the FableticsMindUP collection! Not only is this my first collaboration with @katehudson and @fabletics, but 50% of net proceeds benefit @mindup_hawnfoundation to help children develop the mental fitness necessary to thrive in school and life. The full collection is available in-store and online worldwide! Link in bio.

Watch Goldie Hawn on Ellen Show as she is talking about something inappropriate!

Goldie Hawn is currently 73 years old and she stands in five feet and six inches and currently weighs in 67 kilograms. She is in great shape for her age. Her hair color is blond and her eyes are blue. Her dress size is 5 U.S and 35 E.U.

Goldie Hawn first married Gus Trikonis in the year 1996, who was a dancer and later became a director.

Goldie Hawn then married Bill Hudson from a band called the Hudson Brothers, however, they got divorced in the year 1980.