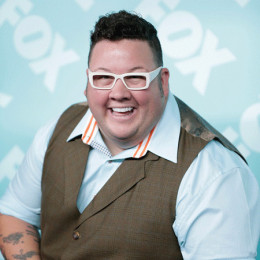 Graham Elliot is an American Chef who has also been a part of the James Beard Award-nominated show Top Chef Masters. He is widely known for his appearance in the Food Network show, Iron Chef America. He couldn't complete his studies so he enrolled as a culinary art major in the Johnson & Wales University. He has worked in various restaurants and TV shows till date.

The American chef was born on January 4, 1977, in Seattle, Washington, USA, as Graham Elliot Bowles. He later moved to Chicago, Illinois where he grew up.

Details about his parents are hidden from the media, but, since he calls himself a 'Navy Brat', his father should have been a US Navy. He is an American with a mixed ethnical background.

Graham left his studies to pursue his career as a chef at the age of 17. Later, he enrolled in the Johnson & Wales University to major in culinary arts. He graduated from the university in 1997.

Graham Elliot started his career at the young age of 17. He used to work as a busboy and a dishwasher in his early days.

After his graduation, Graham has worked in various restaurants and also on TV shows. Elliot was a part of the American Food Competitions such as Iron Chef and Top Chef Masters alongside Bobby Flay, Mario Batali, and Kames Oseland. During his tenure, he was named Food & Wine's Best New Chefs in 2005 and became the youngest chef in the US to receive four stars from the Chicago Tribune.

In May 2008, Elliot opened his restaurant, Graham Elliot Bistro in Chicago. His restaurant has garnered a lot of Michelin stars including a visit from the former President Barrack Obama. Likewise, he was also the owner of another restaurant, Grahamwich. However, it closed in 2013.

As of February 2018, he launched his first restaurant in Asia, Coast at MGM Cotai. Similarly, he is also the Culinary Director of the Lollapalooza music festival.

Similarly, the chef has also published his book, Cooking Like a Master Chef: 100 Recipes to Make the Everday Extraordinary. He has also had a chance to cook alongside the Hollywood hero, Steve Harvey.

Graham Elliot has won a number of honors for his work in the culinary arts industry. He became the youngest chef to receive four stars from a major publication at the age of 27 years. Similarly, he also earned a spot on the Crain's Chicago Business list of '40 Under Forty', which includes honors of high profile celebs such as Oprah Winfrey, Lupe Fiasco, and Mark Zuckerburg.

The chef also earned two stars from the Michelin Guide in 2013. It was one of the just three restaurants to receive two Michelin Stars in Chicago. Furthermore, Graham has also been a nominee of the James Beard Award three times. But, unfortunately, he has not won any till date.

Regarding his net worth, Graham Elliot earns in million as he has his own restaurant in Chicago and is one of the top chefs in the US. As of 2018, Graham Elliot's net worth is estimated at around $1.5 million.

Since Graham has been a part of the Emmy Award-winning show Top Chef, he earns over $1 million per year from the show. His book Cooking Like a Master Chef: 100 Recipes to Make the Everyday Extraordinary is priced at $14.99 and $19.62 in Amazon for its Kindle and Hardcover editions.

Talking about his personal life, Graham Elliot has married twice. He has not disclosed any information regarding his first wife. He has one son from his first marriage. He married his second wife, Allie Elliot, and has fathered two sons with her.

He seems to be very happy with his second wife, Allie and his children, Mylo Ignatius, Conrad Matthias, and Jedediah Lindsay. He resides in Chicago with his family.

Together with his wife, Graham Elliot ran the Bank of America Chicago Marathon in 2014. Currenlty, he is trying to keep his weight in check to spend more quality time with his family.

She is gorgeous and beautiful. She has given birth to two handsome sons. Her picture along with him can be found in different sites.

He is his child from his previous marriage.

He is the eldest son from his second marriage. He resembles more like his mother.

He is the youngest child from his second marriage. He is a very healthy child.