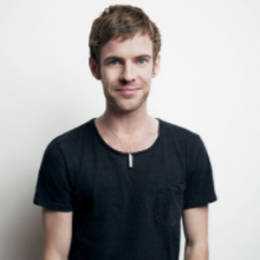 An English actor, Harry Treadaway is well known for his role in the horror-drama series Penny Dreadful. At the initial phase of the career, he began with the band formed by him and his brother. Later, expanding his career to acting, he debuted with the movie, Brothers of the Head in 2005. The handsome hunk is currently in a relationship with his girlfriend from years.

Harry Treadaway was born Harry John Newman Treadaway on 10th September 1984 at Royal Devon and Exeter Hospital in Exeter, Devon. He was raised by his architect father and a primary school teacher mother along with his siblings, Luke Treadaway (twin brother) and Sam Treadaway (older artist brother).

He along with her twin brother attended Queen Elizabeth’s Community College in Deven where he won Devon Cup twice with Rugby Union team. The two brother then formed a band named, Lizardsun, inspired by Eddie Vedder. Both of then attended National Youth Theater with the support of their drama teacher, Phil Gasson.

Treadaway debuted from the movie, Brothers of the Head by Keith Fulton and Louis Pepe where he acted alongside casts Luke Treadaway, Sean Harris, Jonathan Pryce, Ken Russell, Bryan Dick, John Simm, Tania Emery and so on.

A year later, he worked in a TV film Agatha Christie’s Marple in 2006. He then got many offers and did back to back movies including Afterlife, Recovery, Control, Cape Wrath, City of Ember, Albatross, Mr. Mercedes and others.

Among all Treadaway’s contributions, he is best known for his work in the series, Penny Dreadful where he shared the screen with Eva Green, Josh Hartnett, Timothy Dalton, Reeve Carney, Billie Piper, Rory Kinnear and others.

Treadaway is currently dating actress Holliday Grainger since January 2015. She is a British actress best known for her role in the series, The Borgias.

He has an identical twin brother, so many confused him with Luke Treadaway. It so happened that even the paparazzi thought that Luke was dating Grainger, but it was actually Harry.

The 33-year old actor, Treadaway has a good height of 5 feet 10 inches (1.78m). His movie, City Of Ember, collected $17 million at the box office. Likewise, he has been a cast of Penny Dreadful since season 1, probably earning a decent amount from it.

Considering the successes of his movies and series, he might have collected a net worth not less than $1 million.