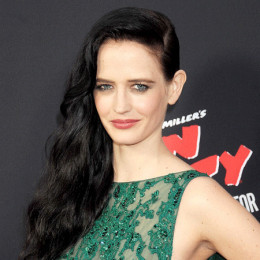 Eva Gaëlle Green is a French model and actress, well known for role in 2005 film Kingdom of Heaven and in the 2006 film Casino Royale. She is the recipient of the 2006 BAFTA Rising Star Award. By Empire magazine, she was voted the 6th sexiest movie star of all-time in the year 2007. She was born to Walter Green, a dentist and Marlène Jobert, an actress. She studied acting at Webber Douglas Academy of Dramatic Art in London.

Eve Green is possibly single at the moment. She is quite secretive about her personal life which might be the reason, she hasn't revealed much about her private life.

DISPONIBLE DÈS MAINTENANT !! “About me, people often talk about a so-called mystery that I would convey. No, I am not a femme fatale, no more than a seductress. I would admit my Gothic side, but there is nothing mysterious about me. The reality is less romantic: I am extremely shy. I do not go out, do not feel comfortable in society: in fact, you do not see me anywhere. I have no worldly talent and can easily be paralyzed as soon as I am invited to a dinner where I do not know anyone. Even as a child, I was always holding back. However, I have no problem in playing a role, with make-up on, dressed up, armed with the words of another. My mother often tells me that there are two people in me: a reserved girl and another one, which I do not always understand, capable of extremes. My astrological sign is Cancer. But someone explained to me that there is probably a mistake: I have everything of a Gemini woman.” - Eva Green on practicing a profession that is contrary to her nature #EvaGreen by © @arnaudpyvka for @madamefigarofr (November 9, 2018) Creative Director: @franckbenhamou Interview: @richardgianorio Hair: @kenorourke1 using @cwhairlondon products Make-Up: @lisaeldridgemakeup Woolen coat: @loewe High jewelry necklace in white gold, onyx, six rubellites, peridots, turmalines, six amethysts and diamonds: @bulgariofficial Wild Pop Shot on location in Rome, Italy. Read the interview (in French) at the link in bio.

She considers herself nerdy. She once said,

"When people first meet me, they find me very cold... I keep myself at a distance, and I think that's why I'm so drawn to acting. It allows me to wear a mask."

Sources reported that she lives a low key life and lives alone. When asked about what people would be surprised to know about her, she responded,

"I guess people would be surprised to find out that I am a bit of a homebody. I do not like clubbing or going to wild parties. After a day of shooting, I love to come home and relax by the fire with a glass of wine and a good book. Boring, huh?"

She is not dating a boyfriend, also, details about her relationship and affair is a mystery.

Apart from her romantic life, she expressed interests in entomology and taxidermy. She collects insects and skulls.

She joined the long list of women who went public about being sexually harassed by producer Harvey Weinstein in October 2017. She reported that she ended only when she had to "push him off". She reported the incident on her Twitter account.

"I have not discussed this before because I wanted to maintain my privacy, but I understand it is important to do so as I hear about other women’s experiences. Women are often condemned when they speak out and their personal reputations tarnished by association. I salute the great bravery of the women who have come forward. We should recognize that this sort of behavior exists everywhere and is not unique to the entertainment industry. The exploitation of power is ubiquitous. This behavior is unacceptable and needs to be eliminated."

Though Green kept herself far from dating rumors for a long time, she's currently dating her boyfriend Tim Burton. The pair who first met during an interview session have been dating since years despite their 22 years of the age gap.

Green's net worth is estimated to be around $8 million as of 2019. The main source of her earning is from her career as an actress and model.

Green was born on 6 July 1980 in Paris, France. She belongs to French and Algeria descent.

She studied at the American University if Paris. She took an acting course at the Webber Douglas Academy of Dramatic Art in London.