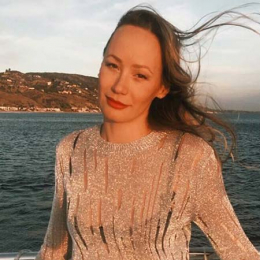 Heather LaCombe is a gorgeous model, artist, actress and fashion enthusiast based in Los Angeles. She has a huge fan base in social media including Facebook and Instagram where she shares her love story, details about her profession including the health issues she happily overcame. She creates awareness against beast implant and effects associated with it as she has a better past regarding the same health complication.

Gorgeous model Heather LaCombe is currently dating fashion designer Todd Thompson and the lovebirds are open about their romance on social media.

It's still in private when the pair started dating but things definitely started after Thompson divorced his celebrity wife Giada De Laurentiis. The former pair Laurentiis and Thompson separated in 2014 and finalized their divorce back on 3 September 2015 so, it's pretty sure that the new love blossomed sometime between 2016 and 2017. 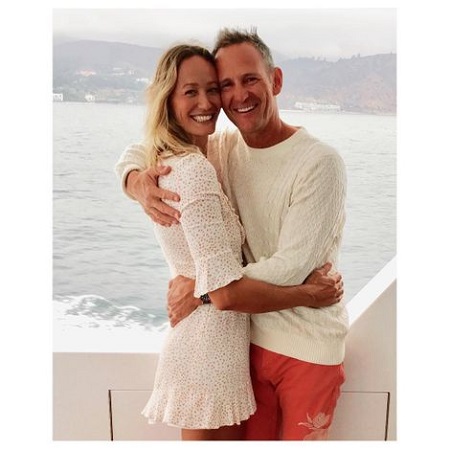 Heather is active on Instagram, Twitter, and Facebook where she posts romantic images with her boyfriend. Apart from her affair, it regularly posts images with Thompson's daughter and a baby boy. She posted an image with the two children with the caption,

"These two have the biggest most beautiful hearts... and I’m soooo Lucky to have their love"

Celebrating Mother's Day with those lovely kids, she posted another image. Details about the baby boy is still behind the bar but her fans speculate that the boy is her son from her past relationship.

The lovebirds don't miss a single chance to celebrate their togetherness whether it's the celebration of New Year or Valentine's Day.

Here's the pair sharing a passionate kiss celebrating the big day of their life!

As the couple is going pretty serious about their love affair, it's sure that they would get married soon. As of December 2021, LaCombe and Thompson are yet to tie the knot. Not to mention, Thompson is also a father to a daughter from a past relationship.

Well, Heather is also a mother to two children she shares with her divorced husband Scott Rigsby who is a real estate agent. Not to mention, Heather and Scott had a tough divorce battle with the interior designer having filed domestic violence restraining order against the father of her children.

Not only that, the divorce ruled that Rigsby had to pay LaCombe $400,000 and $8,500 for child support every month. Heather divorced her first husband Scott in 2019.

Heather LaCombe's Net worth and Earnings

She is gaining increasing fan followers each day on social media. She garnered 14.5k followers on Instagram where she makes $90.75-$151.25 per post. On the other hand, she has only 231 followers on her Twitter account.

Besides modeling, she works in a Los Angeles-based interior design firm. She is also the creator of custom furnishings.

LaCombe, the famous Instagram star better introduces herself as a philanthropist working to create awareness regarding breast implant illness and complications.

I've been waiting until this moment... until I've felt whole again to share my story with you all... I feel whole again because I've finally underwent a successful reconstructive surgery using Fat Grafting to the breast. It's been almost 2 full years now since my battle with breast implants started... 2 years of some of the most horrific physical and emotional stress I have ever had to endure. My health plummeted, I lost full range of motion in my left shoulder. I had scar tissue attached to my rib cage and intercostal muscles, that pulled and tugged when I took a deep breath or stretched my arms. I was unable to do a single push up after a full year of trying (and I used to be able to do 50) This is just a little piece of the story... Please read the full version on Facebook (link in profile) and feel free to share, in order to help spread knowledge to as many women as possible. Love to you all Photo by @lanedorsey

She came forward and shared her story about her battle and complications with breast implants via Facebook post in February 2017. She had small breasts so she decided to go under the knife to look bigger at 19. She called the decision the worst one of her life as she underwent many health complications following the surgery.

"At the young age of 19, I decided to get breast implants. It was a professional decision, even though I did like my little breasts. They were tiny, but they were beautiful, symmetrical. I didn't really realize just how perfect they were. I was a model, and wanted the catalog work, however, and the money that goes with it. And let's face it... almost every small chested woman, no matter how much she likes her little boobs... secretly wishes they were a little bit bigger."

She faced painful reactions even after three years of the surgery when she was advised to replace the implant. She invested $200,000 in the surgery with $5000 in the former one. As she felt so cold, heavy and lost motion in her left shoulder and diagnosed with an autoimmune condition called Hashimotos and Gilberts disease, a chromosome issue, she finally decided to remove the implants and live what's she actually looks.

She shared her health issue in a long Facebook post and requested her fans to share the thing so that others can keep themselves away from the adverse effects of plastic surgeries.