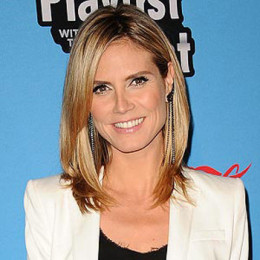 Heidi Klum is a fashion designer, model, television personality, businesswoman and occasional actress, best known as a judge on the NBC reality show America's Got Talent. She came to prominence as the first German model to become a Victoria's Secret Angel in 1999 and for her appearances on the cover of the Sports Illustrated Swimsuit Issue. She was born to Günther Klum, a cosmetics company executive and Erna, a hairdresser.

Her personal life is full of ups and downs. Till now she has been married twice but unfortunately both of her marriage didn't last long.

She was married to her first husband Ric Pipino for nearly five years. After getting divorce, she dated an Italian man Flavio Briatore with whom she have raised a daughter Helene (Leni) Klum.

After the breakup, she met a British singer and musician Seal with whom she was married from 2005 to 2014 and has raised three children Henry Günther Ademola Dashtu Samuel, Johan Riley Fyodor Taiwo Samuel and daughter Lou Sulola Samuel.

She made her relationship with new boyfriend Tom Kaulitz via Instagram post in May 2018. The couple made red carpet debut at Cannes Film Festival.

Heidi Klum and her fiance celebrating one year of togetherness

The girlfriend-boyfriend couple tied the knot back in February 2019. But they kept their marriage private. Later, on 3rd August 2019, the husband-wife couple married for the second time.

We did it Mr.&Mrs. Kaulitz

Both of them were looking stunning at the time of their wedding.

She amassed a net worth of about $120 million as of 2019. The star makes the amount from her several professions including a TV career, modeling, and business career.

She appeared on the cover of the Sports Illustrated Swimsuit Issue. In 1999, she was the first German model who became a Victoria's, Secret Angel.

He is the first husband of Klum, who is an Australian born actor. The two stayed as husband and wife for nearly 5 years.

He is the second husband of Klum, who by profession is a singer. The two enjoyed their marital relation for almost 9 years.

She is the very first child of Klum, whom she gave birth at the age of 30.

He is one of Klum's children, whom she gave birth at the age of 33.

She is the youngest member in the house, who was born healthy on October 9, 2009.