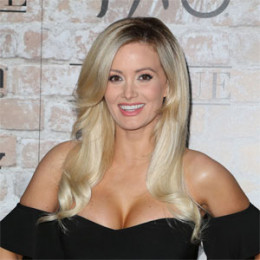 American model, TV personality, actress, author Holly Madison is best known for her roles in the movies and TV series like The Girls Next Door, Holly’s World and Telling among others. Madison began her career from modeling before establishing herself as an actress. Madison is currently married and is a proud mother of two children.

Holly Madison was born on 23rd December 1979 in Astoria, Oregon to parents Steven Cullen and Patsy Cullen. Madison is American as per nationality and as far as her ethnicity is concerned; she is White. She has two siblings, Stephanie Cullen and Joe Cullen.

When Madison was 2, she with her family moved to Craig, Alaska. She attended a middle school there. Later, they returned to St. Helens and completed her high school. Madison then studied for two years majoring in psychology and theater at Portland State University.

Madison shifted to Loyola Marymount University after moving to Los Angeles. To afford her college fees she worked in various places. Madison became a Hawaiian Tropic model and also served as a waitress.

Holly Madison made her Hollywood debut from the movie, The Last Broadcast in 1998. In 2002, Madison featured in MTV Cribs.

Madison was invited to the Playboy Manson (late playboy magazine’s founder, Hugh Hefner house) at the age of 21. In 2003, she appeared in E! Network’s reality TV series named, The Girls Next Door alongside Hugh Hefner, Kendra Wilkinson, Bridget Marquardt, and Crystal Harris among others.

In 2009, leaving The Girls Next Door, Madison worked in another reality show, Holly’s World with Laura Croft, Angel Porrino, and Josh Strickland.

Madison was part of a bikini parade where she and Las Vegas Mayor, Socar Goodman led the Guinness World Record-breaking parade. She also appeared in the show, Peepshow by Jerry Mitchell, one of the longest-running show at Planet Hollywood.

Holly Madison, The Girl Next Door star was in a relationship with the late founder of Playboy Magazine, Hugh Hefner who died at the age of 91. They started their relationship in 2001 and announced their break up in 2008. She also passed a statement,

"It was a constant struggle. I was trying to sell this image of ‘Oh everything is so great here,’ but I was miserable inside. "I'm never dating anybody again. I don't need a man. I'm really happy with myself and being with my friends... I'm focused on forwarding my career. I'm working on producing my own shows. Girls Next Door was a great place to start but it was somebody else's show. I'm just ready to move on."

Madison’s life changed after meeting her current husband, Pasquale Rotella in 2011 and eventually started dating. In June 2013, her boyfriend, Rotella proposed to her with an 18-carat yellow diamond ring at the top of Ferris wheel.

Some months after their engagement, the pair married soon in the same year. The ceremony was held in California’s Disneyland in a fairy tale theme attended by almost 150 guests.

Apart from this, Madison openly spoke about her cosmetic surgery. She had both breast augmentation and rhinoplasty to make it proportionate. After the surgery, her size increased from A-cup to D.

Net Worth, Body Measurement and Insurance

Holly Madison, 37, stands at the height of 5 feet 7 inches (1.7m). Madison, the gorgeous model who debuted from the movie, The Last Broadcast currently has an estimated net worth of $6 million which she earned from her various professions.

Some of Madison’s movies that collected a good amount at the box office include Scary Movie 4 with $178.3 million and The House Bunny with $70.4 million. Madison also earned a good amount from her first memoir, Down the Rabbit Hole: Curious Adventures and Cautionary Tales of a Former Playboy Bunny which became the New York Times Bestselling memoir.

Her next memoir, The Vegas Dairies: Romance, Rolling the Dice and the Road to Reinvention also made it to The New York Time Bestseller List. Apart from this, Madison has claimed that she read Hefner's will that he made during their breakup in 2008, according to her, he had left her $3 million.

Holly Madison had to go through a breast surgery. After the surgery in 2011, she insured her breasts for $1 million.

In 2017, the former Playboy bunny sold a historical LA property for $8.2 million which she and her husband had bought for $7.1 million.

On 10th September 2013, Holly Madison married her longtime boyfriend, Pasquale Rotella, a CEO of Insomniac. They are still together and is share a great bond.

Rainbow Aurora Rotella is the first child of Holly Madison and Pasquale Rotella, born on 5th March 2013 before the marriage of her parents.

Some years after the birth of the first child, Holly Madison and Pasquale Rotella welcomed their second child named, Forest Leonardo Antonio Rotella.