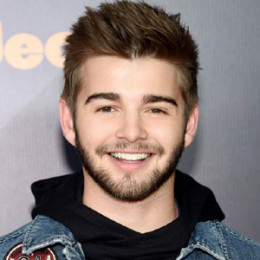 Born on 11th December 1996, Jack Griffo spent his childhood in the city of Orlando, Florida along with four siblings.

In 2011, he joined Hollywood industry and was seen in the American psychological thriller movie Sound of My Voice directed by Zal Batmangli.

The same year, he was seen in the TV series Kickin’ It and Bucket & Skinner’s Epic Adventures. He is one of the actors to receive popularity in short period of time.

In 2012, he was dating co-star of The Thundermans, Kira Kosarin. The relationship did not last long. After the break-up, he dated Ciara Bravo, an American actress in 2013. They were co-stars in the TV series Jinxed.

He was also romantically involved with Ryan Newman, an American actress, singer, and model. The boyfriend and girlfriend have shared the screen in See Dad Run in the year 2012. Their relationship ended in 2016.

Jack has successfully collected an estimated net worth of $1 million from his career in acting. He is currently living with his family in the city of Orlando, Florida, US.