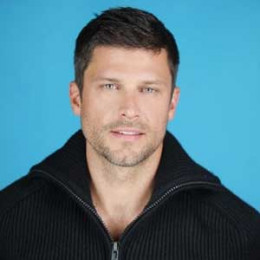 American actor and former fashion model, Greg Vaughan plays former Catholic priest Eric Brady on Days of our Lives. He gained fame as Lucky Spencer from the series 'General Hospital.' He also appeared on 'The Young and the Restless' and played the character Eric Brady on 'Days of Our Lives' since 2012. In 2016, Greg appeared on the Oprah Winfrey Network drama series Queen Sugar as Detective Calvin.

He passed on attending college for the opportunity to travel to Milan, Italy, where he quickly landed modeling campaigns.

Greg Vaughan began his career with a modeling agency. He modeled for designer Giorgio Armani for two and a half months.

Shortly after that, he landed his first role on Baywatch, as well as on the pilot for a 1996 Aaron Spelling series, 'Malibu Shores,' that lead to his future appearances on Beverly Hills, 90210.

On 7th June 2006, Vaughan landed the role of the new spokesperson for 'I Can't Believe It's Not Butter' in a ceremony in New York.

In 2007, he appeared on 'The Tyra Banks Show' to help Tyra Banks through "soap opera school."

On 28th September 2009, he announced that he would exit the role of Lucky Spencer on General Hospital.

In 2012, Greg joined the NBC soap opera Days of Our Lives as Eric Brady. In July 2013, Vaughan performed in "Second Chances," a Hallmark Original Movie, alongside Days co-star Alison Sweeney.

On 14th April 2014, the couple announced they are getting divorced after eight years of marriage, and they did it.Greg Vaughan has been in relationships with Danielle Raabe, Alyssa Milano, Tori Spelling and Julianne Morris.