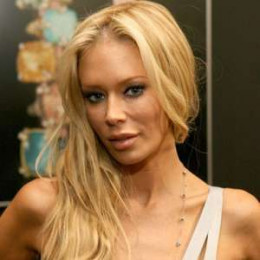 American former pornographic film actress, Jenna Jameson is currently a webcam model and an entrepreneur. She is doing well with her career as of now. She is making an impressive net worth from her multiple careers.

As of now, she is living a great life with her partner, Lior Bitton with whom she shares a child. The star also shares two children with her ex-boyfriend.

An American webcam model, entrepreneur as well as a former pornographic film actress, Jenna Jameson is currently dating Israel born businessman, Lior Bitton. They are together since 2015 and henceforth are inseparable.

The star was previously married twice and had several affairs. She married her first husband Brad Armstrong in 1996 and divorced in 2001. Similarly, she tied the knot to the second husband, Jay Grdina in 2003 and divorced in 2007.

Jenna Jameson has an estimated net worth of $10 million. She makes his money from her multiple careers.

Jenna Jameson was born on 9th April 1974 in Las Vegas. She is American and is of White ethnicity/race.

Laurence Henry Massoli, her father, was a police officer and also a program director and Judith Brooke Hunt, her mother, was a Las Vegas showgirl. She lost her mother due to cancer.

Her first husband is an actor, director as well as an art director. Her first marriage lasted for six years and after that, she got divorced.

Her second husband was a producer as well as a director. Her second marriage also did not last long and they got divorced after five years of marriage.