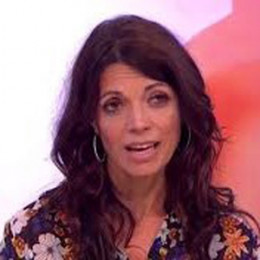 Jennifer Powell aka Jenny Powell is an English television presenter and commentator most known for presenting on No Limits and UP2U. She is known for Loose Women, Live Talk, and UP2U. Previously, she was married to Toby Baxendale.

Powell was born on April 8, 1968, in England, UK to her Cape-colored descent parents from South Africa. She holds the English nationality and belongs to Caucasian ethnicity.

She attended Woodford County High School for Girls in Woodford and then joined Italia Conti school in London.

The proficient commentator began her career in 1985 as the TV ad voiceover for the 6th and 7th volumes of the UK Now That’s What I Call Music series. She then went on to present the BBC2 music programme entitled No Limits.  Furthermore, she was also the presenter of Top of the Pops in 1989.

In addition to these, she appeared on Channel 4’s Brass Eye, a documentary show produced by Chris Morris. Recently Powell has presented Soap fever, Getaway, Live Talk, and Our House for UKTV Style.

She was regular on ITV’s Loose Women and featured in Granada Television’s Stand Up, Jenny.

Moreover, Powell was one of the competitors in the ITV reality TV show named Celebrity Wrestling competing under the name The Avenger. She has remained on television since 2000 and was a presenter on BBC One’s To Buy or Not to Buy.

In June 2008, she presented on ITV’s Bingo Night Live, a television programme featuring a free-to-play bingo game. Then she presented a quiz show, Wordplay on Five in the old Going for Gold Slots. She also appeared in two episodes of ITV2’s Lemon La Vida Loca. As a commentator, she joined ITV’s Bigheads in 2017.

Powell married Toby Baxendale in 2006 in a small yet intimate ceremony. As husband-wife, the pair welcomed two daughters named, Pollyanna and Constance. After the birth of her second child, she suffered from postnatal depression.

At the same time, she was cheated by her husband, Toby. In 2009 she ended her marriage with her husband as she found out about his affair with recruitment consultant Suzanne Galloway.

After being apart from her former husband, she is now dating Martin, who works a sports therapist. The couple met at a local train station.

The 50-years-old commentator is living a lavish life. Currently, she resides with him and two daughters at their residence in Cheshire. She has maintained a net worth around $1.9 million.

The proficient commentator, Jenny Powell was married to Toby Baxendale. The relationship didn't last long as he had an affair with Suzanne Galloway. Powell was pregnant with their second child that time.

Powell and Toby were blessed with their first baby girl in 2007. Currently, Powell resides together with her daughter at Cheshire.