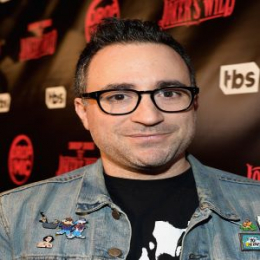 Jensen Carp is a multitalented personality who enrolled in the different filed from writing, comedy, art dealing, producing, podcast hosting to rapping. He is also popular as the spouse of popular American actress, author, and television personality Danielle Fishel.

Jensen Karp is married to his longtime girlfriend Danielle Fishel. Danielle is a well-known American actress, TV personality, and author. Moreover, Fishel is known for her role as 'Topanga Lawrence-Matthews' in Boy Meets World and its successor Girl Meets World.

Today I married my soulmate. We were surrounded by family and friends and it was the best day of my life. I also ate 3 donuts after dinner. Unrelated. @daniellefishel, I love you so much and thank you for giving me this smile. : @jillianbob

Karp began dating the actress back in the year 2017 and the lovebirds finally got engaged on March 22, 2018. Moreover, the couple tied the knot in an intimate ceremony held among friends and family on November 4, 2018, after seven months of engagement.

I remember being a kid and first hearing about Noah’s Ark in school. Our teacher explained the “two of each animal” thing and called it “a miracle.” And immediately, I had to ask - “What happened to the other animals?” The teacher was confused. I said I knew that there were thousands of other animals alive - so, what happened to the other animals during the flood? The teacher looked at me weird, never answered and moved on, but it was hard to ignore that I figured out that even miracles can’t always be 100% perfect. And so here is Adler Lawrence Karp. Our miracle. He was born a month early on June 24th at 4:52 AM, days after he surprised us with not only an early birth, but with a shocking ultrasound that has since taken over lives. Despite months of clean bills of health, at the last minute, he developed unexplained fluid in both of his lung cavities. Our ensuing rollercoaster ride of emotion, terror, vulnerability and unadulterated sadness has been one we did not expect. Adler is currently in the care of incredible, thoughtful and outlandishly skilled nurses and doctors, yet we’re still in so much pain not being able to bring him home. But, @daniellefishel is a partner in every sense of the word, picking me up when I’m down, asking the right questions, giving the perfect amount of love during our numerous visits each day - and she’s already the parent I can only hope to be half as good as at some point. She’s been my savior, alongside our family and supportive friends, each willing to help, always asking for an update. Adler is already the center of my universe. He’s adorable. He has so much hair. It’s ridiculous. He looks like if Nosferatu was a newscaster. Or a Goth Marv Albert. And he’s fighting so hard every single day. I KNOW he’ll be out soon, kissing me back, ruining our lives, ready to board our ark. I’ve remembered that miracles still can’t always be perfect, but as soon as he’s feeling better, it’s going to be difficult to convince me that this little guy is anything but. I’ve included a second picture - one of the rare belly laugh moments, and public outings, from the past week when Danielle ordered a “seasonal fruit plate” at a nearby deli.

The pair are the proud parents of a son. Further, they welcomed their first child, Adler Lawrence Karp on 24 June 2019. However, Fishel only announced it on July first via Instagram post. The family of three is currently living a happy life.

Danielle was previously married to Tim Belusko. Meanwhile, the former couple decided to call off their 3 years long marital relationship. Fishel filed for divorce on October 23, 2015, in Orange County, Calif which got finalized on March 17, 2016.

How Much Is The Net Worth Of Jensen Karp?

Jensen Karp holds the net worth of around $2 million. He garnered this wealth basically from his career as writer, comedian, and producer. In addition, the average salary of a writer is $49,439, the comedian is $30,000 and that of a producer is $65,133 per year in the United States.

Jensen earned a good sum of money from his lucrative career as a writer and producer. Likewise, he is best known for Bromance w/ Michael Cera, Tony Danza, & Martin Starr(2011), The Masked Singer(2019) and Scheer-RL(2015).

Karp co-wrote Just Can't Get Enough with Matthew Robinson in 2007. Moreover, he also entered the Roll Call freestyle competition on Los Angeles radio station Power 106, where he lasted a record 45 days on air to become the show's all-time champion.

Jensen Karp is married to his longtime girlfriend Danielle Fishel. The couple tied the knot in an intimate ceremony held among friends and family on November 4, 2018, after seven months of engagement.

The pair are the proud parents of a son. Further, they welcomed their first child, Adler Lawrence Karp on 24 June 2019.