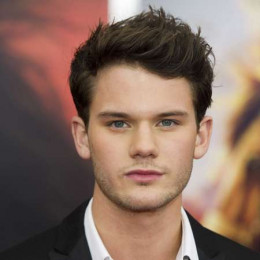 Jeremy William Fredric Smith is aka "Jeremy Irvine", is a British actor who gained international fame for starring in the epic war film War Horse and Now Is Good. He started acting at the age of 16 and since 2009 he has been actively working as an actor.

Is Jeremy Irvine In a Relationship? Who's His Girlfriend?

Jeremy Irvin is possibly single at the moment. However, the rumors say he has hooked up with Jodi Spencer. Even though, the British actor's career took a successful path his love life couldn't do so.

A few years back he was in a relationship with a gorgeous and talented singer, Ellie Goulding with whom he hit the headlines. Irvin started dating in 2012 but broke up in 2013 citing personal issues.

Burn singer was spotted ice skating with Jeremy Irvine post her split from DJ Greg James. Jeremy and Ellie could not stop themselves from flaunting their relationship. Therefore, they attended various red carpets and other special events too.

Besides her, he has dated a number of girls in his life including Amy Wren. 2009-2011. Even his affair with Wren could not last long.

Speaking of offscreen romance, he shares amazing chemistry aside Emma Roberts with whom he stars in sci-fi drama Paradise Hills.

How Rich Is Jeremy Irvine?

Irvine made his on-screen debut in 2009's television series "Life Bites" for twelve episodes. Soon after that, he got an offer to portray in Oscar-winning movie "War Horse".

Some of his acting credits include The Reach, Fallen, Stonewall, The Woman in Black: Angel of Death and The World Made Straight.

The blue-eyed is a philanthropist personality as well. For instance, he uses his newfound fame to raise awareness about diabetes. As he experienced diabetes mellitus type 1 at the age of six and tried a handful of clinical trials.

Jeremy Irvine was born on 18th June 1990 in Cambridgeshire, England to Chris Smith, an engineer and Bridget Smith, a local government politician.

The actor attended Bedford Modern School and joined the National Youth Center. He is Graduated from the London Academy of Music and Dramatic Art.

Jeremy holds an English nationality but belongs to mixed ethnicity. He is of Scottish, Channel Islander, English, and Irish descent.

We can stay connected and check out his hot images simply by following him on Instagram @_jeremyirvine.