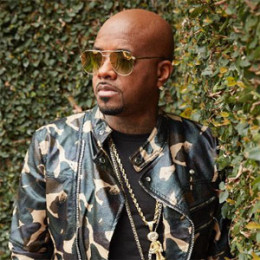 American hip hop record executive and recording artist Jermaine Dupri, 45, is one of the gems in the hip-hop industry. He is one time Grammy Award winner and three-time nominee for the same. Inspired by his father who was an Atlanta talent manager and Columbia Records executive; started his musical career when he was just 10.

Jermaine Dupri was born on 23 September 1972 to the family of Tina (Mosley) and Michael Mauldin. His birth sign is Libra. He's highly inspired by his father as he was a Columbia Records executive of that time and also an Atlanta talent manager.

Born in Asheville, North Caroline and raised in Atlanta, Jermaine began his career when he was just 10. In 1982 Diana Ross show, coordinated by his father, Dupri managed to get on-stage and dance alongside Ross.

When he was 12, he performed as a dancer with the hip-hop group Whodini. Also, he appeared in a music video 'Freaks Come Out At Night.'

Dupri, 46, in 1990, produce his first act- the female hip-hop trio Silk Tymes Leather. In 1991 he became the member of the teen duo Kris Kross members including Chris Kelly and Chris Smith. In 1992, the group released their first album Totally Krossed Out.

In 1993, he established his own record label named 'So So Def Recordings.' He signed the female R&B group Xscape to his label after discovering them in a festival at Atlanta. Their first album, Hummin' Comin' at 'Cha went platinum.

In 1995, he associated with Mariah Carey for the first time in 'Always Be My Baby' which became the number one hit single. He co-wrote and produced many tracks on Usher's 2nd album, My Way in 1997. The lead single 'You Make Me Wanna' peaked no. 1 on the Rhythmic Top 40 and Hot R&B/Hip-Hop chart. Following the trend, another single from the album 'Nice & Slow' reached number-one on the Billboard 100 and Hot R&B/Hip-Hop chart. The last single 'My Way' reached the second position on the Billboard 100.

In Usher's another album titled Confessions, Dupri co-wrote and co-produced three songs that ranked number one on the Billboard Hot 100 namely 'Burn', 'Confessions Part II, and 'My Boo.' Confessions were praised with Best Contemporary R&B Album including the Best R&B Performance by a Duo or Group with Vocals. In 2012, it sold 10 million copies in the US with over 20 million copies across the globe.

He again worked with Carey and became her talent manager replacing Randy Jackson on 7 October 2013. Later, he separated from Carey in August 2014. He organized a reality TV series, The Rap Game with Queen Latifah in 2015. The show aired on Lifetime on the occasion of New Year's Day 2016.

Jermaine Dupri was previously in a long-term relationship with Janet Jackson. They began dating in 2002 but maintained a low key relationship.

Jackson was even suspected to be pregnant with Dupri's child, but the speculations came to an end when she married Wissam Al Mana in 2012.

Dupri was previously in a relationship with a couple of women. He is blessed with two daughters Shaniah Mauldin and Jalynn Dupri. Sources say that Shaniah was born to Pam Sweat in 1998 whereas the mother of Jalynn is still not revealed. Fans and media came to know about Jalynn when Dupri shared her picture via Instagram on National Daughter's Day.

my baby mama and her selfies @universoulcircus

Jackson and Dupri got back together in 2017 after she separated from her former husband Wissam Al Mana in April 2017 after five years of marriage.

Jermaine Dupri Net Worth and Salary

Dupri has earned a huge amount of money from his professional career as a hip-hop record executive, record artist, songwriter, and rapper.

He worked with many artists and produced for stars like Jay-Z, Nelly, Janet Jackson, Alicia Keys, Aretha Franklin, and Ludacris.

Reportedly, he lost his Atlanta mansion in 2014 to foreclosure. He failed to pay his monthly payments due to which he lost his $2.5 million 9,400-square-foot home. He bought the house in 2005 for $3.2 million.

Dupri is the founder of Global 14 and So So Def Recordings releasing more than 25 albums with many golds, platinum, and double-platinum records. The rapper lost So So Def Productions for $1.9 million as he was unable to pay his debt worth $5 million to SunTrust Bank.

Further, he had Lamborghini Murcielago. The current price of the Lamborghini ranges from $354,000-$450,000. The company repossessed the car as he missed payments on it. He was also sued for $80,000.

Shaniah was born in 1998 when her mother was in a relationship with Dupri.