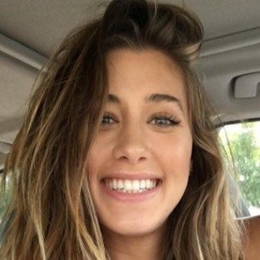 Jessica Serfaty is an American Model who has experience of working with high profile brands. She is also an actress who has worked in a couple of movies. She, however, is best known for her various romantic link-ups with A-list celebrities.

Jessica Serfaty is one of those celebrities whose romantic life gained more media attention than her work. She had an array of high profile relationship, that always kept her in the news.

The former American Next Top Model(ANTM) participant Jessica Serfaty is currently engaged to CEO of Firefly Kaan Gunay. The young entrepreneur popped the question with a leaf-shaped emerald engagement ring while they were on vacation. 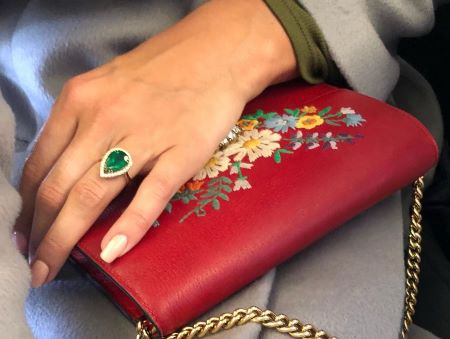 The young couple revealed the happy news through their respective social media accounts. The 28-year-old expressed her happiness via Instagram sharing a black and white picture of them along with the caption "My forever man, I love you so much it hurts." 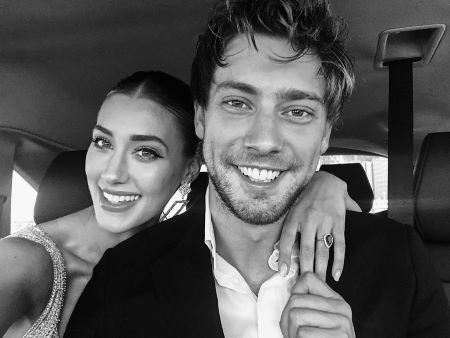 The engagement came as a surprise to many of her fans as she started dating the sucessful businessman only in the latter half of 2018. Furthermore, her last break up was only nine months ago.

The couple though began their relationship only a short time ago, it looks like they have found their soulmate. The love between them is pretty evident by the number of lovey-dovey photos they upload online. More to that, the readiness to commit to one another proves they are in together for a long haul.

The brunette before hitching with Kaan was in a relationship with "Gossip Girl" actor Ed Westwick. They started dated in the summer of 2017 and remained in the relationship for over a year before their split. 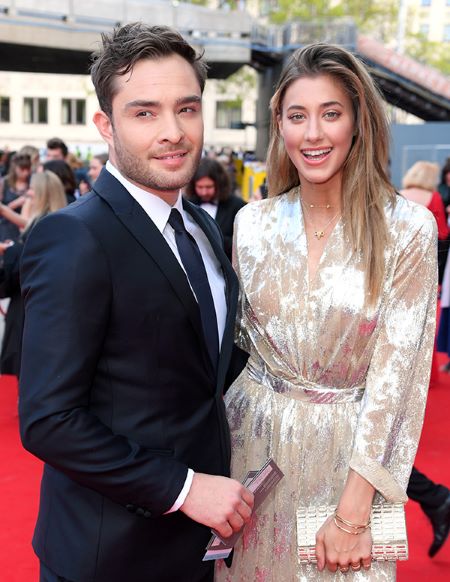 When she was dating the actor, he was accused of sexual assault by multiple women. Since Ed refused to admit any wrongdoings, so Jessica openly supported him and claimed him to be innocent. Later the charge was dropped against the British actor as the police could not find any relevant evidence to support the allegation.

Jessica was with him in the bad times but she was not there to celebrate good times as the couple broke up after a month of clearing his name. The break up was amicable, and they continue to maintain a cordial relationship.

Jessica's Other Past Affairs

The model, before Westwick, was in a relationship with YouTuber Matt Espinosa in late 2016. Their relationship became public when Jessica accidentally mentioned Matt as her boyfriend in a Twitter fight. Later, they became more open about their relationship and started following each other on Instagram. But unfortunately, they ended their love life on a sad note without any official confirmation.

The green-eyed beauty also had a short-lived romance with former Jonas brother band members Joe Jonas. They met during the holiday season of 2015 in Las Vegas through a mutual friend.

Their relationship, however, became public when they were spotted kissing during a ski trip to Mammoth Lakes, California on January 2016. The affair did not last long, and they separated soon as the singer-songwriter was still recovering from his breakup with supermodel Gigi Hadid. 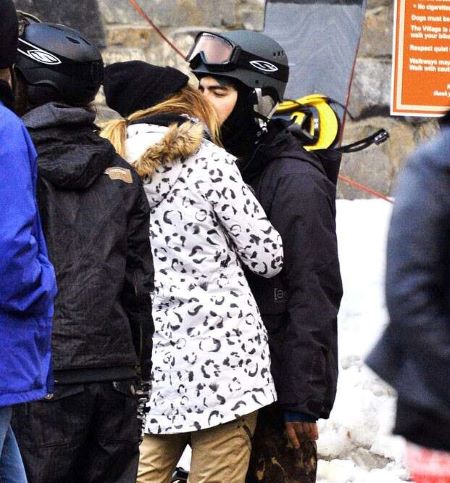 The Arkansas native was also in the relationship with YouTuber Logan Paul in 2014-2015. It was rumored she cheated on him with Justin Bieber. Justin and Jessica were clicked together leaving the restaurant and getting cozy on the dance floor.

The actress additionally was also rumored to be dating One Direction member, Niall Horan. They were spotted together at dinners but nothing has officially confirmed.

"The Ride" actor has a son named Roman Serfaty with her ex-husband Ididira Serfaty. He is an Arkansas based property manager and a licensed pilot.

The duo first met at a church in Arkansas when Jessica was only sixteen, and he was twenty-two. She got pregnant after their first sexual encounter, and the couple decided to get married. 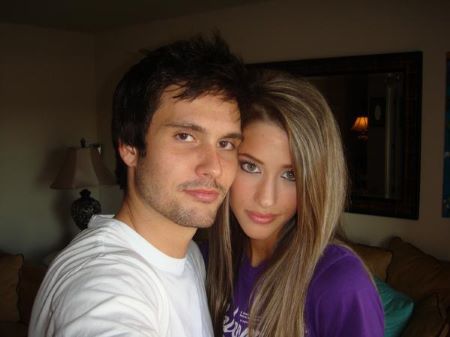 Jessica with her ex-husband Ididira. SOURCE: My Space

After marriage and giving birth, Jessica became a stay-at-home mom at the age of 17. Nevertheless, the young Jessica has modeling aspiration; thus, she participated in the reality TV show "America's Next Top Model".

The long-legged beauty won the fourth position in the show and decided to stay in Hollywood and pursue other modeling opportunities. Her former husband was supportive of her decision, so he and their child moved to California to be with the aspiring model.

The family of three lived happily in Los Angeles for a few months but soon things started taking a wrong turn. Jessica and her ex-spouse began fighting, and she asked for a divorce. However, her ex-partner was not ready to give up on their marriage. He begged Jessica to return to Arkansas so that they can revive their love for one another.

The mother of one agreed and moved to Arkansas keeping her work in the hold in California. Even after going back to her hometown there was no improvement. So, Jessica finally decided to leave Arkansas for good and moved to California. She officially separated from her spouse and agreed to the condition of meeting her child in only summer and Christmas.

At present, "FML" star son is raised by his single father Ididira in Arkansas. She regularly talks to him, however, she is not as involved in his life as her ex-husband wanted. 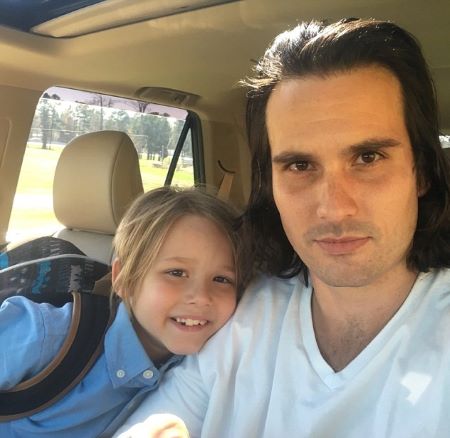 Mr. Serfaty in an interview with Daily Mail said that he wants his ex-wife to be sucessful in her career. However, he do not want her to miss formative years of their son's life. He additionally do not mind if she ever wants to return back in his life. Moreover, he added that he believes God would want them to be together as a family.

On the other hand, the former Mrs. Serfaty also understands the hard time her ex-spouse is facing as a single father. So, she wants him and their son to relocate to California so they can co-parent together. She is even ready to support him financially until he stands up on his feet in California.

Serfaty, however, is most popular on Instagram, where she has over 750 thousand followers. Her Instagram is filled with her pictures, including pictures of her son.

The fit model also regularly flaunts her toned body on her Instagram. She furthermore uses her platform to promote various products.

The Little Rock native first gained popularity when she entered "America’s Next Top Model" as a contestant in 2010. She did not win the show; however, she gained insight of the modeling industry in Hollywood and pursued the modeling profession.

At present, she is one of the most sucessful models in California. She has worked with many high profile brands such as Boohoo and Victoria Secret. On average, a model in California earns $42, 180 annually.

Check out Jessica's ramp walk in a fashion show:

The brown-haired beauty also tried her hand in movies and work in a couple of films. On average, an actor in the USA earns $32.3 thousand- $43 thousand a year.

As mentioned above, she is a social media celebrity with significant fan-following. She earns $2,238 - $3,730 per promotional posts on her Instagram. With all the hustling, Jessica is able to collect a net worth of $500 thousand -$700 thousand. 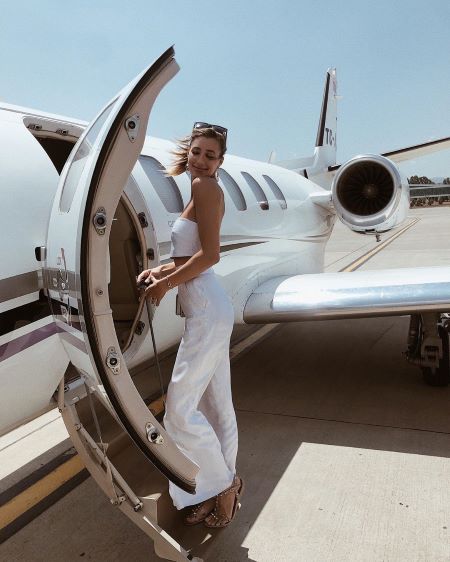 Ididira Serfaty is a property manager in Arkansas. He and Jennifer wed in Arkansas when she was just seventeen.

Roman Serfaty is the child born to Jessica Serfaty and her ex-husband Ididira Serfaty. He mostly lives with his father in Arkansas.