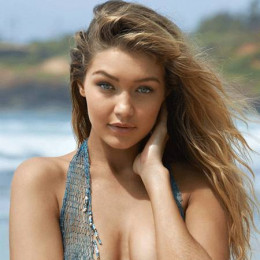 An American beautiful and gorgeous fashion model and TV personality, Gigi Hadid who has already modelled for popular magazines like Elle and Vogue and the covers of Galore and Schon.

Gigi, an American fashion model, and One Direction star, Zayn Malik has not broken again with each other in March 2020. In fact, the pair are officially dating again. The two were photographed walking together in New York walking arm in arm.

Now that the fashion season has officially wrapped up. the starlet finds time for cozier quality time at home with loved ones including her boyfriend, Zayn Malik.

They started an affair in 2015 after Zayn broke up his ex-girlfriend Perrie Edwards. Three years later, they announced their break up.

The 24-year-old model and "Dusk Till Dawn" singer has been in an on-again-off-again relationship for the past four years. After kindling romance for a while, she starred in Malik's music video "Pillowtalk".

Subsequently, after the event, the lovebirds appeared together on a Vogue cover that swirled controversy cause of the magazine's misnaming. They were the third couple to be displayed on the cover of Vogue.

Before the pair broke up in March 2018, they held a Versus campaign as a pair with Hadid as a photographer. Staying apart from one another for two months wasn't easy for them so they reconciled in June 2018. Gigi and Zayn parted ways in November 2018 to reunite in December 2018.

But wait, the same year, they were found kissing in New York. Moreover, in 2019, Hadid was spotted leaving Malik's apartment. Gigi and Zayn sparked rumors of a rekindled romance in 2019, only to confirm they are back together stepping out arm in arm on his birthday. Later, in February 2019 she clapped back at Jake Paul after Malik dissed her man on Twitter.

Gigi Hadid was reportedly dating with Bachelorette star Tyler Cameron. Her rumored boyfriend Tyler is a model by profession. They spent a late-night date recently in August 2019. Even if they are spotted at several places, they are yet to make it public. 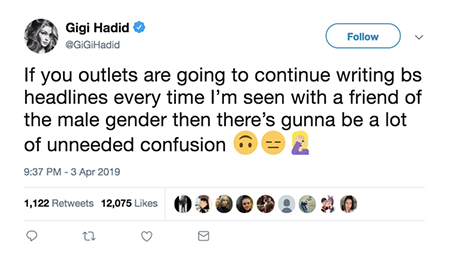 The same year, she was also rumored to be dating Selena Gomez's ex-boyfriend Samuel Krost but she later confirmed that she is single.

In late April of 2020, it was revealed that model Gigi Hadid was pregnant with her first child she shares with on and off boyfriend, Zayn Malik of One Direction. Hadid who is currently believed to in her second trimester of twenty weeks will give birth to her child in September.

Fans also believe that her family including mother Yolanda Hadid and sister Bella Hadid threw baby shower party for her 25th birthday celebration at their farm in Pennsylvania.

Gigi Hadid has a net worth of around $20 million. She makes the amount from her career as a model. Not only Gigi, but her family Hadids have been called the first family of fashion and they have a combined net worth more than $57 million.

Gigi Hadid was born Jelena Noura Hadid on 23rd April 1995. She is American by nationality.

Hadid is a daughter to Dutch American former model Yolanda Foster and Palestinian real estate developer Mohamed Hadid. She has a sister named, Bella Hadid who is also a model.

At the age of 18, she graduated from Malibu High School. After graduating she moved to New York City in order to pursue her career in modeling. She started her career by signing for IMG Models. She has also appeared in the 2015 Pirelli calendar. Recently in 2015, she has been announced as the newest face of Maybelline after she signed the contract.

Stay on marriedwiki.com for more udates.