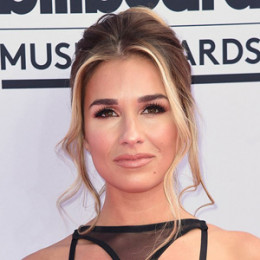 Jessie James Decker, an American singer, and songwriter is also one of the famous reality television stars. The versatile lady is an excellent professional singer, writer and is also a good mother as well. James is very popular through her albums and the singles.

Jessie James was born on 12th April 1988 in Vicenza, Italy as Jessie Rose James in a military family, the reason she lived in many of the cities including, Germany, Texas, Kentucky, Iowa, Louisiana and much more.

James is an American and belongs to the White ethnicity. Her birth sign is Aries. She grew up with her two siblings named, Sydney and John.

Right from the very early age of two, she was interested in singing and used to sing and write songs as well. She even participated in her first ever talent contest where she sang 'I Want to Be a Cowboy’s Sweetheart.'

At the very initial phase of James' career, she was guided by Carla Wallace in singing and writing songs. After multiple auditions, finally, she signed her first ever professional contract along with Mercury Records when she was twenty.

After the hard work and dedication, she finally released her first album named, Jessie James in August 2009. She grabbed much of the fame from her first album as it was ranked 23rd in the Billboard.

Moreover, after the success of the first record, she started working for her second album in 2010 and finally released it on 13th October 2017 and named it as, Southern Girls City Light.

Apart from her singing career, she is also involved in the fashion industry. She debuted her clothing and accessories line, Kittenish in 2015 along with Rachel Turner, a New- York-based fashion designer.

Also, James has her own self-titled YouTube channel, Jessie James Decker where she posts videos related to beauty, style, music and much more. She has more than 169k subscribers on her channel.

When it comes to the private life of James, she married her longtime boyfriend, Eric Decker in a grand ceremony at St. Francis in Castle Rock. The reception of the couple was held at the Castle Cliff Estates.

Despite a busy schedule of the parents, they somehow manage time to take proper care of their children. As of now, the couple is expecting their third child which they announced to the audiences via a video on their Instagram in 2017 and stated,

‘’ Eric and I are so excited to share with y'all that we are expecting baby Decker number 3! As you can see Viv is so happy and Bub doesn't quite know what's going on, but we are over the moon and feel so blessed and can't wait to meet this little one end of March.’’

It shows that the whole family is very excited for the third child and are feeling blessed. Besides her current private life, she was linked with Kim Kardashian’s ex-boyfriend, Reggie Bush in her past. But Jessie denied about the relationship with Reggie and added that they were just hanging out together.

The country singer, Jessie James one of the expert of yodeling. The singer with such an amazing career possibly has a net worth in seven-figure. She along with her husband in 2017 is ready to sell their Georgia mansion for $1.45 million.

The couple, Jessie James, and Eric Decker got married on 22nd July 2013 in a grand way at St. Francis in Castle Rock.

Vivianne Rose Decker is the first child born to Eric and Jessie on 18th March 2014 after a year of their marriage.

The second child of Jessie and Eric was born on 3rd September 2015 in Castle Rock, Colorado, the United States and named him as Eric Thomas Derek II. He is the only son of the couple and is of two years old.