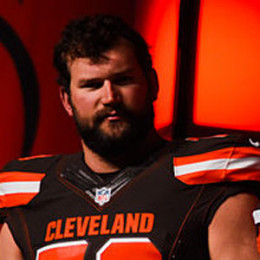 Joe Thomas was born on 4 December 1984 in Brookfield, Wisconsin to the family of Eric Thomas and Sally Thomas. His birth sign is Sagittarius. He stands at a height of 5.74 feet (1.75m).

Later, he attended in the University of Wisconsin and majored in business administration. While in Wisconsin, he played for the Wisconsin Badgers football team in 2003 until 2006. He was named a first-team All-American by Pro Football Weekly in 2005.

He was drafted in the 2007 NFL Draft by the Cleveland Browns where he signed a six-year contract worth $43 million. Soon, he became one of the top-performing members of the 2007 draft.

He made his NFL debut against the Pittsburgh Steelers in the first week and played every offensive snap for the Browns the same year. 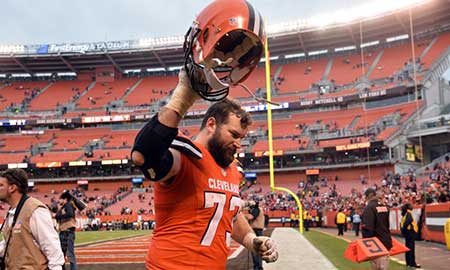 Joe Thomas in the field, Source: For the Win

He came at the second place while voting NFL Rookie of the Year. He was the only person receiving votes besides the regular winner, Adrian Peterson.

He agreed to a record-setting seven-year $84 million extension with a guaranteed $44 million.

He announced his retirement from the NFL on 14 March 2018.

By the end of 2015 season, he became the recipient of Pro Football Focus's Bruce Matthews Award. He came at the 23rd position on the NFL Top 100 Players of 2016.

He played his 10,000th consecutive snap being drafted into the NFL withing missing a single play. He became the first player reaching the milestone in the history of NFL.

His consecutive snap streak ended at 10,363 on 22 October 2017 when he injured his triceps. He suffered from a torn triceps in his left arm that ended his 2017 season early.

He has an estimated net worth of about $48 million as per the Richest with an average salary of $19.3 million.

He earned about 0.5 million from brand endorsements with $500,000 from sponsors like PepsiCo and Nike.

He was charged with 11 alleged environmental violations charges that include damming a navigable waterway, discharging manure in the wetland, and dredging a pond near his residence near Muscoda in 2014.

During a telephone interview, he said,

"I know it sounds horrific when you see the list of violations, but in the end, it’s rabbit turds here."

Thomas is a happily married man. He tied the knot to a professional basketball player Annie Thomas.

She is a former University of Wisconsin Women's basketball star. She also worked as an assistant coach at the Cleveland State University. The couple has two kids; Logan Thomas, 5 and Camryn Thomas, 3. 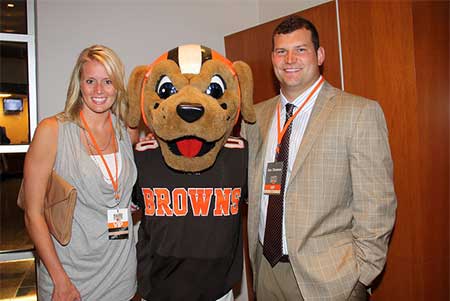 Besides sports, the Thomas family have a passion for several outdoor activities. They are usually spotted at their farm in the Southwest Wisconson fishing and hunting.

The couple currently resides in Cleveland.