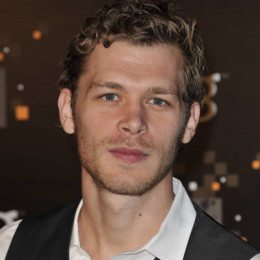 Joseph Morgan is an English actor who was born on 16 May 1981 (age 37), in London, England. He is the son of mother, Sarah Martin, and father, Nick Martin. He is the oldest son of his parent. The younger one is his brother, Jack Martin.

During his early days, he lived in Swansea for around 11-year. He studied at the Morriston Comprehensive School and learned acting from BTEC Performing Arts course at Gorseinon College.

In order to train himself in drama and speech, he attended the Central School of Speech and Drama in London. He studied at the college during his late teens and become more and more interesting in the field of acting.

Joseph Morgan started his career in Sky One Television Series, Hex, playing the role of Troy. Then in the same year, he appeared in the movie, Eroica enacting as Matthias.

He then played some minor roles in Spooks, Henry VIII, and William and Mary. He only played in one or a few episodes. Then in the year, 2005, he started getting some major roles in movies and TV series like Alexander and Master and Commander: The Far Side of The World.

In the year 2010, he played the lead role of Judah Ben-Hur in the movie, Ben Hur. The English actor came to the public eye when enacted as Klaus Mikaelson in the hit TV series, The Vampire Diaries. In season 2 of the show, he played a recurring role and then in the season 3 to 7, he became a series regular.

Discussing his personal life though he has dated a number of beautiful celebrities, currently, he is married to his girlfriend who is occupationally an American actress and musician.

During the shooting of The Vampire Diaries, he laid his eyes on a beautiful lady named Persia White. It was then when he felt like that she is the one. The couple soon started going out.

They started dating in 2011 and eventually got engaged in 2014. Soon after their engagement, they started planning their wedding. The pair tied the knot on July 5th, 2014.

The actor and his girlfriend had already decided on the location of their wedding. They exchanged vows in the Caribbean Island of Jamaica in a private villa. There were only 26 guests at the wedding. The pair danced on the song, Never Let Me Go.

For their honeymoon, they went to Negril. For now, the couple doesn't share any children but in an interview, he has stated they will love to start their family soon.

There is no news of any divorce and extramarital affair from both sides we can conclude they are leading a happy married life.

The actor is famous for his role in various TV series and Films. His current estimated net worth is $3 million. The average salary of the Vampire Diaries star is around $30k per episode.

He is the supporter of the charity, Positive Women. He usually urges his fans to acknowledge his birthday by simply donating to the cause. He also donates to the charity.

They first met each other on the set of 'The Vampire Diaries'. she has already given birth to one daughter from her first marriage.