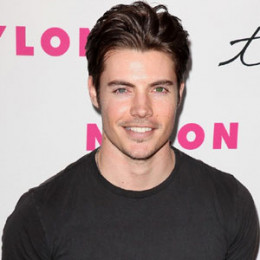 Joshua Baret Henderson, better known as Joshua Henderson, is an American actor and model. He is known for his role John Ross Ewing III in American prime time television soap opera, Dallas and as Austin McCann on the ABC television series Desperate Housewives. He is also a singer and widely known for his appearance on the WB singing competition show Popstars 2, where he was one of the winners and selected to be a member of the pop group, Scene 23.

Born on 25th October 1981, Dallas, Texas, Joshua Henderson was raised by his mother, Sharon Lea Henderson in Tulsa, Oklahoma. He attended Memorial High School in 2000 and graduated from Tulsa Memorial Senior High School, where he used to enjoy playing sports like baseball.

He is one of the TV stars who has got two different eye color; his left eye is green whereas, right eye is blue. His condition is called heterochromia.

Joshua began his career as a singer and auditioned for International reality television franchise, Popstars and won a spot in the group Scene 23. After winning the show, he pursued his career in acting and modeling.

In 2002, he made his appearance in the American sitcom, Maybe It’s Me, created by Suzanne Martin which starred Reagan Dale Neis, Partick Levis, Andrew Walker, Julia Sweeney, Fred Willard, Dabbs Greer and so on. The same year, he appeared in a sitcom, Do Over, created Kenny Schwartz and Rick Wiener.

After playing few TV sitcom, he made debut with the horror movie, Leeches!, directed by David DeCoteau. After that, he appeared in The Girl Next Door.

IN 2006 he appeared in box office hit movie, Step Up, an American romantic dance movie, directed by Anne Fletcher in 2006. The movie starred Channing Tatum, Janna Dewan, and Drew Sidora. It earned $114.2 million at the end of the year and was ranked second in the North America box office.

He played in the American drama television series, The Arrangement, created by Johathan Abrahams in 2017. Apart from acting, he has worked in different music video including Ashley Tisdale’s He Said She Said, Suddenly, I really Don’t Think So and Florida Georgia Line’s Stay.

Joshua dated Kristen Storms, an American actress, in 2004. The couple dated for years and broke up in 2005.

In 2006, he dated Ashley Green but they soon parted ways in the same year. He then had an affair with Kendal Sheppard, but unfortunately, the duo split in 2007. From 2007-2008, he dated Brittany Snow, an American actress, and singer.

According to the sources, he was once rumored of dating Rihanna but both of them deny the rumor and soon the news faded.

He was spotted with Andrea Boehlke at Nautica Men’s Spring 2014 fashion show during Mercedes-Benz Fashion Week. They soon fell for one another but their relationship lasted till 2016.

His co-actress from the drama series, The Arrangement, Christine Evangelista is his alleged girlfriend as per the rumor. Their Instagram accounts tell that they are probably dating as they have shared many pictures in which they are seen together.

Joshua has successfully collected an estimated net worth $2.5 million which he earned from his career in acting, singing, and modeling. He earns $50 thousand salaries per episodes in the TV series. Currently, he is living in the lavish Malibu Beach House which cost value is around $1 million.