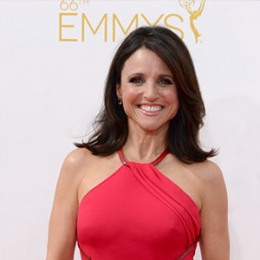 Julia Louis-Dreyfus is an Emmy Award-winning American actress, comedian, producer and singer. Dreyfus is considered 'Television Royalty' as she is the part of many evergreen TV shows including playing Elaine Benes on critical and commercial success show "Seinfeld". She also appeared in other popular shows such as 'The New Adventures of Old Christine' and 'Veep'.

The Veep Star, Julia Louis-Dreyfus, is happily married to comedian and actor Brad Hall since 1987. The college sweethearts are each other support system for more than 30 years. The actress recently shared a throwback picture of the couple on their 31st wedding anniversary.

31,000 years ago today, I married my current boyfriend.

The pair first met while attending Northwestern University. After performing in the school's "Mee Ow Show", she received a chance to join a theatre group named the 'Practical Theatre Company' that was partially owned by her future husband. Julia dropped out of college during her junior year and joined the cast of Saturday Night Live along with Hall.

Julia was totally smitten with his charms and stated in the interview,

"He was gorgeous. He looked like Björn Borg or something. I remember thinking early on that this was the guy for me, but I didn't dare tell anyone, for fear they would say, 'That's ridiculous. You're so young—you don't know what you're talking about.' So I kept that little secret close to my heart."

The lovebirds dated for six years before getting married in a private ceremony. The couple shares two children Henry Hall, born in 1992, and Charlie Hall, born in 1997. Henry's now a musician in Los Angeles, while Charlie's at Northwestern playing in the basketball team.

30 years ago today this happened. So far so good.

Dreyfus has revealed her secret for the long successful relationship with her husband and that's all the adventures they enjoy together as a family. The couple travels frequently and participates in several adventure sports, such as river rafting, hiking, and skiing.

Dreyfus private and professional life have moved smoothly for most of her life but things got a bit difficult from 2016. First, her father passed away in 2016 and then a year later she was diagnosed with breast cancer.

The "Seinfeld" alum wrapped up her chemo treatments in January 2017 followed by surgery. The following month, she shared a photo of herself after an unspecified surgery, captioning it with a fierce and funny message about her recovery.

Chemo #2: finito. We are NOT fucking around here. “I’ve got the eye of the tiger. The Fighter dancing through the fire cuz I am a champion and your’re going to hear me ROAR.” Thanks to @mrtonyhale & @timothycsimons & @katyperry for their hilarious and loving inspiration.

As the 58-year-old actress was preparing to return on the track, she dealt with another loss in the form of her niece from half-sister Emma. The actress didn't comment on the loss publicly which led tabloids to speculate that the siblings were estranged. However, Julia cleared the rumor stating that she wanted the family to have privacy and not the loss publicized.

Julia Louis -Dreyfus Net Worth. Know more about her Wealth, Properties and Cars

The TV Veteran of more than 25 years, Julia Louis-Dreyfus's net worth is around $200 million. She is one of the highest-paid TV actors in the US receiving around $150 thousand per episode. Also, Julia is the daughter of Billionaire Gérard C. Louis-Dreyfus, whose net worth is estimated to be $3.4 billion in 2016 by Forbes.

Her late father's family business covers wide sectors including natural gas, telecommunications, and real estate that hold $55.7 billion in revenue as of 2015.

Me, my dad & Mamie last night

Julia's spouse Brad Hall is a millionaire himself and has a net worth of $10 million. The superpower couple currently resides in one of the three homes in California. Her Beach house in Montecito, California is popular for being extensively eco-friendly. The beach home which was purchased by an actress in 1996 is in 3,000 sq. ft. with 4 bedrooms but has modern eco-friendly technologies.

Louis-Dreyfus was born in New York City as Julia Scarlett Elizabeth Louis-Dreyfus on January 13, 1961. Her American-born mother, Judith was a writer and special needs tutor. Her French father, Gérard Louis-Dreyfus, is a billionaire and chaired Louis Dreyfus Energy Services. In 1962, one year after Louis-Dreyfus's birth, her parents divorced. 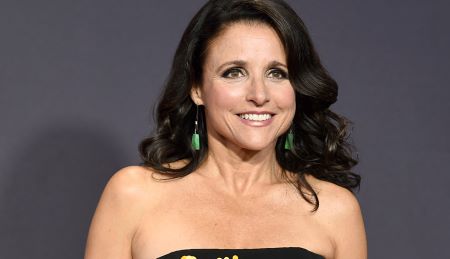 Dreyfus comes from a conglomerate family as her great-great-grandfather was Léopold Louis-Dreyfus, who in 1851 founded the Louis Dreyfus Group, French commodities, and shipping conglomerate, which members of her family control into the 21st-century.

Her mother remarried a surgeon named Tom Bowles and moved to Washington D.C. She graduated from all-girls Holton-Arms School in Bethesda, Maryland in 1979. She attended Northwestern University in Evanston, Illinois where she was a member of the Delta Gamma sorority, and studied theatre for several years. In 2007, she was invited back to Northwestern to receive an honorary Doctor of Arts degree.

Louis-Dreyfus was a cast member on Saturday Night Live from 1982 to 1985, the youngest female cast member in the history of the program at that time. Then she got her breakthrough role of Elaine Benes on NBC's Seinfeld. she went on to play roles in other megahit shows such as The New Adventures of Old Christine and Veep.

Louis-Dreyfus received a Golden Globe Award and seven Emmy Awards. She received a star on the Hollywood Walk of Fame in 2010. She was inducted into the Television Academy Hall of Fame in 2014. Unfortunately, her name was misspelled and had to be replaced—it read Luis instead of Louis!

Louis-Dreyfus's maternal half-sister, Lauren Bowles, is an actress, who appeared with Louis-Dreyfus on Seinfeld, Watching Ellie, and The New Adventures of Old Christine. She also has two half-sisters on her father's side, Phoebe and Emma.

Brad Hall who was born as William Brad Hall is an American actor, comedian, director, and writer. He is best known as a Weekend Update news anchor on Saturday Night Live and for creating the sitcoms The Single Guy and Watching Ellie.

Henry Hall is the first child of famous actor Julia Louis-dreyfus and comedian Brad Hall. He is a musician by profession. He has a younger sibling.

Charlie Hall is the second child of the actress of Julia Louis-dreyfus and comedian Brad Hall. His older brother is musician Henry Hall.