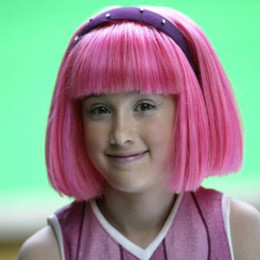 Daytime Emmy Award-nominated actress, Julianna Rose Mauriello rose to fame after she portrayed the role of a pink-haired eight-year-old girl, Stephaine in Nickelodeon's musical comedy program, LazyTown. Following the stardom, she almost vanished from the limelight.

Born on 26th May 1991 in Irvington, New York Julianna Rose Mauriello is an actress. Her sun sign is Gemini. Rose is an American citizen and belongs to Mixed ethnicity (Irish, Italian and German ancestry). Her parents raised her with her sister, Alex (an actress) and a brother.

When Mauriello was young, she along with her family moved to Manhattan. Moreover, Mauriello attended New York City's Performing Arts School. She along with her brother used to participate in several schools musical theater plays. Later, she studied ballet, tap, jazz, and Irish step dancing.

Julianne Rose Mauriello started her career from a very young age. She appeared in a party scene of Nutcracker at SUNY Purchase. Similarly, in 2002, she made her stage debut after being discovered by Nancy Carson, a theatrical agent. She earned her first role, Li'l Titch in the revival of Rodgers and Hammerstein classic, Oklahoma!.

Following her debut, Mauriello worked in many theaters plays. Her breakthrough came in 2004 in the Nickelodeon's musical comedy program, LazyTown, filmed in the LazyTown Studios in Iceland.

She portrayed the lead role of a pink-haired eight-year-old girl, Stephaine. The actress rose to fame for her appearance in the series. Moreover, the series starred Stefan Karl Stefansson, Magnus Scheving, and Chloe Lang. Her performance helped her to score nominations for several awards including Daytime Emmy Awards and BAFTA Awards.

Besides, Rose also appeared in several commercials and advertisements. Following her stardom, she almost vanished from the limelight and media.

How Much Is Julianna Rose Mauriello's Net Worth?

Julianna Rose Mauriello's major source of income is her acting career from where she makes an amazing net worth and salary. As of January 2019, her net worth is around $2 million as per Celebrity Net Worth.

As per some sources, a TV star makes an average salary between $150k to $1million.

Julianne Rose Mauriello is a private person when it comes to her personal life and relationship. She prefers to hide her affairs and dating from the limelight and audiences.

With the available information, the actress is not dating anyone as of January 2019, so, she might be possibly single. Once, she was rumored to be a lesbian and even linked to her rumored girlfriend, Amanda Burwasser. She, however, did not confirm the rumor.

Similarly, as per some sources, she dated one of her schoolmates back in her high school.

Right from the age of 13, Julianne Rose Mauriello started dressing like an adult and was even spotted with a boob tube on screen. Due to such reason, she became a sex icon at a young age.

Moreover, during her stay at the Windsor Luz Hotel in Virginia, the staffs made a complaint against her behavior. As per the report, a police officer tricked her and promised to pay $900 if she did the same to the office what she did on the TV series, LazyTown.

Later, the actress accepted the proposal and was arrested on the charge of prostitution.

Check out the interview of Julianna Rose Mauriello!