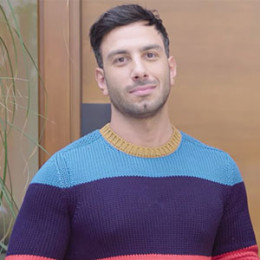 Jwna Yosef is a Syrian-born Swedish painter. He is a Kurdish Armenian artist who has participated in several exhibitions and art fairs. He is also a founding member of The Bomb Factory Art Foundation in North London.

Jwan Yosef was born on 6th September 1984 in Ras al-Ayn, Syria under the birth sign Virgo. He holds two nationalities, Swedish & Syrian. As far as his ethnicity is concerned, he is of mixed ethnic background. He is the son of a Syrian Kurdish father and an American Christian mother.

Yosef along with his family immigrated to Sweden in his early days. Between 2004 to 2006, he studied painting in Pernby School of Painting, Stockholm.

Later, Yosef moved to Konstfack University College of Arts, Crafts and Design, Stockholm. He graduated from the University with the bachelor degree in Fine Arts in 2009.

The same year, Yosef participated in the Threadneedle Prize exhibition. He also participated at the BEERS Contemporary Award for Emerging Art that year.

Yosef took part in a group exhibition at Galleri Bon in 2015. He participated with the group exhibition, There and Black with fellow Konfack graduates; with Josef Bull, Natasja Loutchko, and Peter Davydtchenko.

The couple owns a Beverly Hills Mansion worth $13.5 million. They also own a house in New York City costs $8.4 million which is currently on sale for $7.1 million. They have a Range Rover $177,200.

Jwan Yosef is openly gay. Yosef is married to his boyfriend, Ricky Martin (a Puerto Rican singer and actor). The pair tied the knot in January 2018 in a cozy ceremony in presence of limited guests.

The couple announced their relationship in April 2016 during an event at the amfAR, The Foundation for AIDS Research gala in Sao Paulo.

Yosef started dating his boyfriend in 2016. They made an announcement of their engagement on Ellen DeGeneres Shows.

The pair has twin sons, Matteo Martin and Valentino Martin via surrogacy. Yosef currently resides with his husband and children in Beverly Hills.

Five Fast Facts about the couple

In January 2018, Jwan Yosef married his homosexual boyfriend, Ricky Martin. The couple announced their relationship in April 2016 during the amfAR, The Foundation for AIDS Research gala in Sao Paulo.