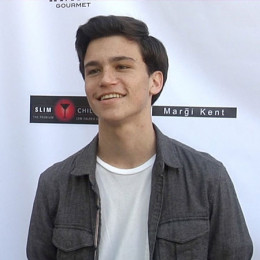 Being an actor in a small age brings many obstacles for a youngster, while some rise above those obstacles whereas some can't. Kalama Epstein lies among those young actors in Hollywood who made name by hard work and dedication. He is famous for his work in the award-winning short film The Kid. He also garnered fame by working in the Nickelodeons Bella and the Bulldogs.

What is the Relationship status of Kalama Epstein? Who is he Dating? Know about his personal Life;

Kalama Epstein is currently dating a famous dancer and actress Daniela Leon. The duo shares a good bond and is open about their relationships. The pair do not hesitate to share their pictures on social media.

Epstein, the Crazy Ex-Girlfriend and his partner celebrated their third anniversary of being in a relationship on 24 October 2019. The actor took a picture of himself holding his sweetheart, Daniela.

He captioned, " 3 years with my best friend. The goofest, funniest, most talented human I know. The person that can put a smile on my fae effortlessly. I am so grateful for past 3 years".

"happy valentine’s day to my best friend and love, Valentine Leon today is your day! Because your name is Valentine! Or at least I think it is... oh sh-"

Scrolling their Instagram account, it came to know that the couple first started dating on 24rd October of 2016. Have a look at their picture where they were celebrating their two-year anniversary.

Celebrated two years with this beautiful soul yesterdayHad an absolutely magical weekend at Disney and a beautiful dinner last night. It was all just total perfection

Even though, some sources claim Epstein and Leone has been dating since October 2016, Kalama was already romantically linked to his bestfriend turned to girlfriend from the mid-2015. For instance, Kalama appeared on Daniela's Instagram for the first time on July 20, 2015 laying down on her lap.

Kalama loves to spend his time on the ocean and often goes for body-surfing and body-boarding. In addition, he loves playing the ukulele and do photography as well. He also likes to travel.

What is the Net Worth of Kalama Epstein?

Kalama Epstein holds an estimated net worth of $300,000 all thanks to his acting career. Moreover, he is believed to have a salary of $50-$100 per hour, however, it depends on the tv show's popularity and it's production.

The kid movies actor Kalama Epstein and his girlfriend Daniela Leon during their holiday in Disney.

Epstein first worked and realized about his love for acting after co-starring on an episode of Hawaii5-0. Since then, he starred in many television series which includes Amazon Studios pilot Maker Shack Agency, the Nickelodeon show Deadtime Stories and Under the Blood Red Sun. Above that, she also worked in various national commercials.

The acting sensation is currently working in the season 4 of The Fosters television series. Further, he also starred as a guest on many shows like CW's Crazy Ex-Girlfriend, Nickelodeons Bella and the Bulldogs, and Disney's Dog with a Blog. Over that, he starred in the famous award-winning short film The Kid and co-starred in the episode of HBO's Ray Donovan.

Kalama Epstein was born on 5 May 2000 in Oahu, Hawaii with Taurus zodiac sign. His name has a meaning in Hawaiian decent in which Kamala means 'flaming torch'. He is the youngest child of his family and shared his childhood with his two siblings.

The 18-year-old actor started working as an actor in his early life and garnered great support and love from audiences and his fans. Considering his works he was once nominated for the Best Youth Actor in a Supporting Role at the Inaugural Love International Film Festival in 2016.