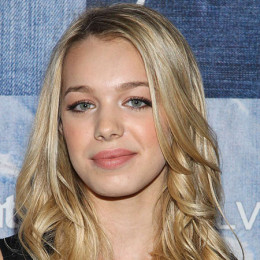 Sadie Calvano lies among one of the famous rising American actresses who gained fame and name by their work in the television industry. She is popular for her role as Violet Plunkett in the television series named Mom.

What is the Relationship Status of Sadie Calvano? Who is she Dating? Know about her Personal Life

Sadie Calvano is currently relishing lovey-dovey relationship with her new mysterious boyfriend. They have been seeing one another for few months now. In addition to that, the blonde beauty celebrated her 23rd birthday on April 8 with her partner despite the coronavirus pandemic.

The NCIS cast shared a beautiful picture of herself kissed by her spouse-to-be on Instagram on April 9. In the next video, one can see her man making a special dish for Sadie and the caption reads:

"Regardless of quarantine, today was without a doubt one of my most special birthdays to date. In these dark and uncertain times, today was a might bright spot. I feel so lucky to have spent another year on this earth".

Hopefully, the actress will soon reveal the identity and relationship status of her. And, assuming the chemistry between two, Calvano and her lover will take the bonding far.

Calvano, the "Mom" actress is no more in a relationship with the famous producer and photographer Alex Brisker. The couple sparked dating rumors for three years now but in the beginning they never revealed anything about their relationship to the public. The duo is sharing a healthy relation and prefers to stay out of media for.

The duo reportedly started dating from the year 2016 and since then both of them are spotted in many events together. The pair is truly in love and it will no surprise to seem them walk down the aisle soon, rather than later.

last day of shooting in Boston today!! hope to be sharing this one soon!! xx

The Package actress is out of previous dating rumors and controversies, moreover, she seems to be career oriented and focused on her acting career.

The Hollywood actress is an animal lover and pets many of them. In fact, she owns a pet dog named Olive and often shares its picture on her social media accounts. Likewise, she also loves to travel in many places in her free time as she shares a lot of pictures of her on vacation.

What is the Net Worth of Sadie Calvano? Is she a Millionaire?

Sadie Calvano's estimated net worth is $200,000 all thanks to her acting career in both films and television series. The American actress is believed to have a salary of $81,000 per year as a Film actress and $50.88 per hour as a television actress.

The 21-year-old actress first debuted in the television series from the NCIS as Rebecca on the episode named 'Worst Nightmare'. After which the doors of the entertainment industry for her opened as an actress. She, then, starred in numerous films and television series which includes Eagleheart, Village People, Crash & Bernstein and many more.

Among all her work in the American television industry, she was mostly praised and loved for her role in the television series named Mom. She starred along with Anna Faris, Allison Janney, Nate Corddry, and many more for over three seasons as the main role, one recurring role on season 4 and as a guest star on season 6. Furthermore, her appearance in the American comedy Netflix film The Package is also popular.

today is the day!! #thepackage is live on @netflix now!!! so excited for you guys to watch!!

In addition, her co-stars from the Mom series, Anna Faris and Allision Janney holds an estimated net worth of $20 million and $14 million respectively.

As for her achievements, she was nominated for the Young Artist Awards in 2011 & 2013 for her work in NCIS and Kickin' It. She also won the Gracie Allen Awards for her role in the television series Mom.

Sadie owns an old class Mercedes Benz 280SE white colored luxurious car which is estimated to have the market price of $39,000+.

Sadie Calvano was born on 8 April 1997 in Los Angeles, California, the United States. Her birth sign is Aries.

She holds an American nationality and is of white ethnicity. She was from a middle-class family and was raised by her father named Piper Calvano and her mother.

The Mom's actress first studied at the Los Angeles Country High School for Arts. Then, she studied at the Sherman Oaks Center for her Enriched Studies and finally joined Occidental College in Los Angeles, California.

Furthermore, she started her acting career at the age of 7 by working in many theatre musicals which includes her appearance in the theatre productions named Alice In Wonderland and Beauty and Beast in 2008. Likewise, she starred in High School Musical in 2009 and Bugsy Malone in 2011.

Additionally, Sadie is an active person on social media which includes Instagram, Facebook, and Twitter. She has over 46.5k+ followers on Instagram, 11.6k+ followers on Twitter, and 15k+ followers on Facebook. Not only that, she is the official spokesperson for Bags4kids and an organization which supplies comfort packs to displaced foster children.