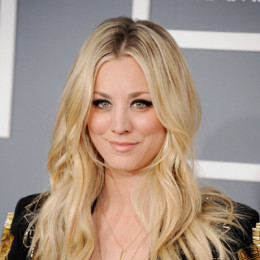 An American actress who is popular for her role as Penny on the CBS comedy TV series The Big Bang Theory. She is daughter to Layne Ann and Gary Carmine Cuoco, a realtor. She is of Italian English and German descent. When she was young she was regionally ranked amateur tennis players. When she was just six years old she did Barbie ads. She started her professional career as actress from her role as young Karin Carter in the 1995 action thriller movie named Virtuosity.

Kaley Cuoco was born on November 30, 1985, in Camarillo, California, the U.S. to Layne Ann (Wingate) and Gary Carmine Cuoco.

Kaley Cuoco made her acting debut in the 1995 action thriller Virtuosity as the young Karin Carter. She landed her breakthrough role as Bridget Hennessy on the ABC sitcom, 8 Simple Rules in 2002. The sitcom also stars, John Ritter, Katey Sagal, David Spade, and others.

Regarding her personal life, Kaley Cuoco is married to her longtime boyfriend, Karl Cook. The duo tied the knit in 2018.  Previously, she was engaged to professional tennis player Ryan Sweeting in September 2013.

After three months of dating, the duo married on December 2013. But the couple failed to handle their married life and divorce in 2016.

Since she was attracted to tennis from her small age it is no wonder she choose to marry professional tennis player.After 6 month of their engagement they turned their relationship into marriage.