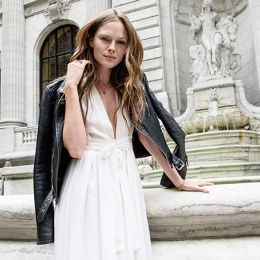 Kate Nauta is not only an actress, but she is also an aspiring model and fabulous singer who never fails to impress her audiences. She is better known for her works in the movies like Transporter 2, The Game Plan, and Nine Miles Down. She is also popular for working as a model for famous brands like L'Oreal, DKNY, and Motorola. At the age of 17, Kate won the U.S. Elite Model Look contest.

Kate Nauta is currently married to a fashion lover like herself named Robert McKinley. Robert is a popular creative director, designer, and Hotelier. The duo shares a bold bond and is together in a marital relationship from four years.

The pair shared the wedding vows along with their close friends and family on 14 June 2014. As being a private person, Kate has closed the doors of information regarding her personal life and marriage details.

The 36-year-old actress is out of any rumors and controversies regarding any past relationships and affairs. Moreover, she is in a happy relationship with her husband as there is no sign of divorce between them. Additionally, Kate is an active person on social media and posts a lot of pictures of her personal life and professional life.

How much is the Net Worth of Kate Nauta?

Kate started modeling from the early age of 15. After working for two years as a model she won the competition named U.S. Elite Model Look and went to France to compete in the finals of the competition. Since, then she modeled for many brands like Versace, L'Oreal, DKNY, and Abercrombie & Fitch. Besides, she also worked in the advertisements for Motorola.

As for Nauta's acting career, she debuted in the film industry by working in the 2005 French action thriller film Transporter 2 as a role of Lola. After that, she appeared in many films like The Game Plan, Fear Clinic, Nine Miles Down, Avalanche Sharks and more. Among of her all films, The Game Plan made a quite a big name and grossed over $146.6 million on the box office against the budget of $22 million. Furthermore, she worked along with many international celebrities like Jason Statham, Amber Valletta, Dwayne Johnson "The Rock", Kyra Sedgwick, and many more.

Just got word that my show tonight at @Rockwood Music Hall will be streaming live in Virtual Reality on @Endlessriff. You can download the app for free on @oculus at http://bit.ly/EndlessRiffOculus.

The Transporter 2 actress is also a singer and writes lyrics from time to time. She wrote and sung a song named Revolution which is on the soundtrack of Transporter2. Further, she once worked with Lenny Kravitz for her own song. Additionally, she also featured in the song named "Name Game(Remember)" of the hip-hop/rap group Naughty by Nature.

Kate Nauta is currently married to a fashion lover like herself named Robert McKinley. Robert is a popular creative director, designer, and Hotelier. The duo shares a bold bond and is together in a marital relationship from four years.